Liza is a Lizardfolk, she has a appearance of a young girl, having orange hair, with bright yellow eyes, her hands and feet are those of a desert lizards, and she has a tail. in her normal clothing, she only wears a purple "winter" hoodie-jacket that covers her upper half of her body and wears her hoodie on, because of her long tail, she has difficult time wearing pants.

Liza shows to have an enjoyable side, like how children see things, she is shown to be very happy in many occasions and like other species, she get to blush very quickly. 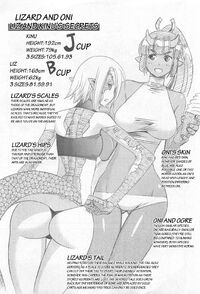 A lizardfolk's tail stores their body's nutrients. If they should lose their tail, worse case scenario is that they'll die of malnutrition.

Retrieved from "https://dailylifewithamonstergirl.fandom.com/wiki/Liza?oldid=61633"
Community content is available under CC-BY-SA unless otherwise noted.