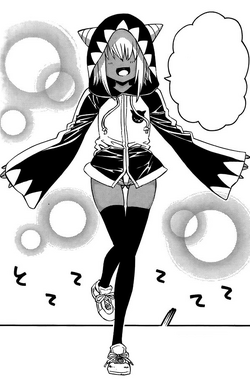 Lolicon (Lolita Complex) is a term used to describe either the sexual attraction to the pubescent or prepubescent female form (ages 9-17 or younger) in fiction and/or an individual (male or female) possessing such a sexual attraction and/or desire. The term is also the name of a genre of manga/anime that caters to such interests by showcasing female characters that possess pubescent or prepubescent forms and mannerisms. The term is derived from Vladimir Nabokov's 1955 novel Lolita, which details a man's obsession with a twelve-year-old girl.

The prominent rise of "Lolicon" material in Japanese media (and by direct association; lolicon individuals) began during the mid-1970's when young female characters with innocent personalities began receiving more notice amongst fanbases when compared with the more violent and brash "pro-feminist" personalities of the elder female characters of the time.
Borrowing design cues from the Shoujo genre, where character designs feature an inclination for "cuteness" to appeal to their readership/viewership, the lolicon genre exponentially grew with the introduction of the "Magical Girl" genre; where young female characters take central roles in shonen-esque storylines.

Retrieved from "https://dailylifewithamonstergirl.fandom.com/wiki/Lolicon?oldid=62924"
Community content is available under CC-BY-SA unless otherwise noted.