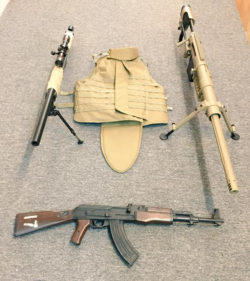 As a government-sanctioned and financed quick response team, Monster Ops: Neutralization is readily equipped with various firearms to aid in their various missions.

The CheyTac Intervention is an American bolt-action sniper rifle manufactured by CheyTac LLC. The gun is capable of delivering accuracy at ranges of up to 2,500 yards (2,300 m), one of the longest ranges of all modern-day sniper rifles.

The United States Navy Mark 14 Enhanced Battle Rifle (EBR) is a marksman rifle originally built for use by units of the United States Navy SEALs, Delta Force, and task specific ODA units. The rifle was created with the intention of carrying out both designated marksman and close-quarters roles in combat. 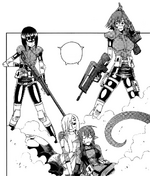 Manako used the Accuracy International in Chapter 15 and Chapter 18.

The Remington-700 SPS (Special Purpose Synthetic) is part of the Remington Model 700 series of bolt-action rifles manufactured by Remington Arms. All are based on the same centerfire bolt action.

Manako used the Remington in Chapter 22. 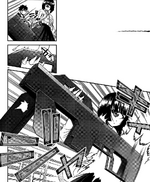 The Folding Rifle is a specially designed automatic rifle that can collapse into a form resembling a handheld briefcase.

The design was originally made to meet the growing need for a convenient, portable, high-firepower gun to be used in response to any liminal-related case that might arise unexpectedly.
However, field testing produced numerous unhappy reports: "The folding connectors are weak so the bullets don't fly straight," "the front-loading magazines are clunky," and "I get my finger and clothes stuck in it when it's transforming." Due to the negative reports, further development plans were scrapped after only a handful of prototypes had been made and tested.

Manako used the rifle in Chapter 22 and Episode 11.

The PP-2000 is a submachine gun made by the KBP Instrument Design Bureau. It was designed as a close-quarter combat weapon, intended for riot police and special operations forces. In 2008, it was adopted as one of the two standard SMGs of the Russian police. 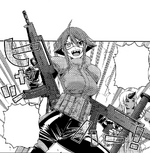 The Kbk wz. 2005 Jantar is a Polish experimental assault rifle. This weapon uses a standard 5.56×45mm NATO round.

The GIAT FAMAS is a bullpup-styled assault rifle designed and manufactured in France for use in the French military.

The Steyr AUG is an Austrian bullpup assault rifle, adopted by the Austrian Army as the standard small arm of the Austrian Bundesheer and various national police units.

The rifle and its variants have also been adopted by the armed forces of Argentina, Australia, Bolivia, Ecuador, Ireland, Luxembourg, Malaysia, New Zealand, Saudi Arabia, Tunisia, Pakistan, and the U.S. Immigration and Customs Enforcement agency.

Zombina used the Steyr in Chapter 22.

Zombina used a sawed off shotgun in Chapter 39. Instead of regular ammo it was loaded with rock salt shells.

On top of using a battering ram, Tionishia equips Deployable Police barricade, two in fact. She can use them to protect the squad from oncoming fire, and also use them to pin down suspects.

When needing to break through walls or doors, Tio sometimes wears a set of thick armour resembling a bomb suit or knight's armour that encloses her whole body, with a glass visor allowing her to see from inside and a hole in the helmet for her horn to poke through. It is not known how strong her armour actually is, but it is likely immune to bullets and shrapnel from explosives.

Retrieved from "https://dailylifewithamonstergirl.fandom.com/wiki/M.O.N.%27s_Guns?oldid=61959"
Community content is available under CC-BY-SA unless otherwise noted.