It was serialized in Magazine Special magazine by Kodansha from June 2010 to September 2011 before being collected into one tankoubon volume. Seven Seas Entertainment licensed the manga for an English release on February 13th, 2018.

Mako-chan is striving to become a professional witch, but before she can graduate from school, she must travel to the human world to complete her studies. It’s there she meets a lewd young man named Onodera Junji, whose interest in Mako-chan is far from pure. Can Mako-chan’s magic skills transform a pervert such as Junji into a good person? 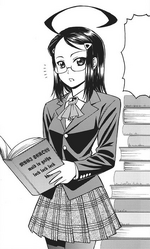 A prim and proper honor student who holds fiercely to her position as the top student in her class. She can come off as a bit overbearing, as she's hard on everyone (including herself) but she truly cares about and stands up for others and is trusted in turn.
Since she holds the position of class president of class 3-A, most people refer to her as "Class President," or "Class Prez." To her, this role isn't merely a position, but a medal of honor signifying her hard work and triumphs. Because of this, she prefers being called by her position rather than her name.
She is such a brilliant student that her grades are in the top five for each subject. However, this achievement doesn't come from natural-born genius but is rather the fruit of her intensive studying, That said, she's never earned the #1 spot in any subject and she secretly cherishes concerns over not having a subject at which she truly excels or enjoys. 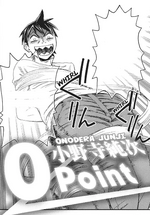 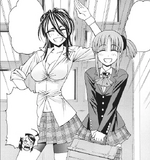 One of Mako's close friends, messy, optimistic, and easy-going, but pretty irresponsible. She's something of a problem child who consistently relies on Mako for her schoolwork, but she values friendship more than anything and is secretly a little concerned that Mako is a little too tightly wound.
Even her clothes are sloppy since she only wears an undershirt (with no bra); and while she wears bike shorts under her skirt, this is simply to prevent chafing during broom-riding, and not to protect her from panty shots.
An adrenaline addict who loves speed and thrills on an entirely different level than most, she satisfies her need for speed by flying around on her broomstick whenever she gets a chance. Because of this, she's become so skilled at flying that she's referred to as the "fastest broom-rider on campus." While she holds the top grade in broomstick-riding, she's disastrously poor at all other subjects, and as such is on the verge of being held back. But this fact doesn't really bother her all that much.

Along with Shun, she is one of Mako's close friends. Her personality is more reserved and she's a scaredy-cat. She never does anything without Mako and Shun. She's a bit slow, a klutz, and trips at every possible opportunity. Her grades tend to suffer due to all of her misfortune, and she often has Mako help her study.
The fact ath she triggers explosion magic whenever she receives a strong impact causes problems for everyone around her. Paired with her natural klutziness, this means she leaves a trail of craters wherever she goes. These explosions occur because she has preternaturally high fire magic, much to her dismay.
As a result, she wears a custom-made uniform made from fire-rat fur. It was made a little on the large size so she could grow into it, but she hasn't grown at all and it's still baggy on her even now in her senior year. 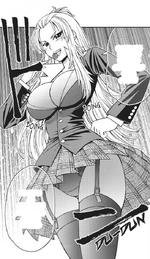 The "King of Devils" who was renowned for unifying hell under a single banner, Zihg Zahgger was sealed away by angels. However, he managed to split a part of his soul and seal it inside the soul of Junji Onodera when he was a baby. As Zihg's influence on Junji increases the more aroused he is, Zihg is inadvertently "resurrected" after Mako and Sera accidentally flash their panties at him.
The entire reason that the Devil King unified hell was to create a harem of all the most beautiful women in hell. Similarly, the entire reason behind his war with the angels was allegedly because he asked them for some angels to add to his harem.

Junji's goody-two-shoes brother. While benevolent and one life away from becoming a saint, Jun is rather ignorant and is completely oblivious that Mako is a witch despite her friend destroying his brother's room while he was still in the house.

The manager of a maid cafe with no managerial sense. After preventing his suicide attempt, Junji and Mako agree to restore his maid cafe with the aid of Mako's friends.

A legendary wizard that Mako idolizes. Mako desires to become his apprentice and believes that having the best grades in school and becoming valedictorian will help her to achieve her dream.

Retrieved from "https://dailylifewithamonstergirl.fandom.com/wiki/MaMaMa:_Magical_Director_Mako-chan%E2%80%99s_Magical_Guidance?oldid=59997"
Community content is available under CC-BY-SA unless otherwise noted.