Manako (マナコ) is a Monoeye and member of the M.O.N. who serves as the team's sniper, due to her keen vision.

As a Monoeye, she has one eye instead of two, she has short, shoulder-length bob-cut purple hair and wears her standard M.O.N. uniform.

She is somewhat shy, and somewhat depressed; worried she was placed out of range because her teammates didn't like her.

When she is with those who are close to her, Manako is usually withdrawn, shy and only speaks to others when they speak to her. She claims to not do well with crowds of people and is prone to hiding herself as well as bumping into few objects until someone escorts her.

Manako is also very self-conscious about her eye, to the point where she is convinced the world hates Monoeyes. That is until after her date with Kimihito, when she begins to act flustered and believing that there are people like him in the world who like Monoeyes.

She is also quite self conscious about her bust size. The knowledge that Centorea was too big to fit properly in a 103cm bra put her into a state of shock. 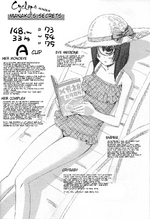 She and her team were first called in to deal with a gang of Orcs that had taken over Libido Dojin. She sniped all their guns from a distance before joining the rest of the team. They later came to Kurusu's with Sumisu for dinner.[1]

Later when Kurusu caught a cold, Sumisu took time out from her heavy workload to "treat" him herself, leaving Manako and her group to do all the work themselves. While she stated it was to keep the other girls away from Kurusu while ill to avoid a viral mutation, she simply wanted to slack off. However, when she caught his cold, her coworkers refused to help her for the same reason.[5]

The M.O.N. were assigned to apprehend Ranchera, Manako attempted to snipe her but missed, resulting in her escape. Later on they tracked her down to a warehouse where Sumisu agreed to having her transferred to Kurusu's household.[6]

Later on, when Kimihito was sent a death threat, M.O.N. were assigned to act as guards while Sumisu went on a "date" with him, however the operation failed when Miia and the rest of the girls arrived.[7]

The M.O.N., excluding Doppel, decide to each go on a date with Kimihito after receiving a second threatening letter from D and in order to see whether or not D will appear while Kimihito is alone or with a girl. Manako was the third and last to date him. While Kimihito was looking for something to do, Manako was keeping her distance from him due to being nervous around people close by. He tells her to be closer to him since they are on a date, but she was unable to get closer due to hiding herself with her hat, causing her perception to be compromised and resulted in her bumping or crashing into solid objects. Claiming to be no good in crowds, she then asked to be somewhere where there are less people. After finding a less populated area, Kimihito offers her some tea while claiming that crowded areas can seem tiring. Manako ponders his kindness as he is the only person who treats her like a normal person, unlike so many others she was acquainted with who usually avert their eyes out of fear or disturbance. She wonders if he does so because he has no choice and is really afraid of her and the others. She asks if he cares to look at her assuming that he wouldn't, however Kimihito looks at her with complete concern and Manako becomes very flustered when he looks at her normally.

It was during her date that M.O.N. discovers someone watching them and they all attack and restrained her only to discover that it was their teammate Doppel in disguise as well as realizing that she was the one who wrote the letter. Afterwards, Doppel asks if they all had a good time with Kimihito. Manako felt a bit embarrassed because Kimihito treated her as if she was a normal girl, but was happy he did so. [4]

When Manako and the rest of MON showed up to Polt's Gym to watch Cerea and her mother joust, she was saddened because everyone had bigger breast than her. [8]

She later appeared at the the end of chapter 38, along with the rest of MON after Zombina lost her tooth. After leaning Yuhi had turn into a zombie, they were put under house arrest. [9]

However, when Kimihito and Lala are apologizing for what happened, Manako and the others weren't angry at all, and were actually happy to finally be on a little vacation. She along with others decided to take Kimihito on his deal and decided to each go on a date with him. [10]

Later when Kimihito came to pick her up for their date he overheard her distress and barged in to check on her, but was caught by surprise after seeing the pictures of eyes all around her room. It turned out she was training herself to get past people's glances. She was even more worried due to some of her co-workers not looking her in the eye. She actually started to cry because of her embarrassment of not being able to go out. However Kimihito desired to spend the day helping her get over her fear, treating as fulfilling his promise which actually made her blush. Zombina and Tio soon showed up to help too, giving her a box of "clothes" to try on. Such as a Biker Outfit, Military Hazmat Suit, scuba diver suit and  Bunny Outfit. She later tried on a more casual outfit with black bar like sunglasses which Kimihito and the others liked, which made her happy. After tying on a pair of correctional glasses she was unable to see where she was going and ended up falling on top of Kimihito, landing on his chest, this lead to him having a full front view of her panties which embarrassed her.

She was about to give up when Kimihito decided to take her to a festival, while wearing a mask. After bumping into a group kids, she was surprised that they didn't run away from her and called her Onee-chan, which proved the mask worked. They later played a number of festival games which Manako proved to be very good at, which resulted in the crannies apologising to her and begging her to stop. Later after enjoying a corn on the cob she and Kimihito headed home. She later became concerned about the two co-workers that had been avoiding her, after they were captured by Zombina and Doppel. They explained that the reason they couldn't look her in the eye was because they thought she could see into their "Dark Minds". They didn't do it because they hated hate her, and started to think of the "sides of Manako" that they like. However they are warned by Zombina and Doppel to not try anything with her. They also inform her that they are used to her, which made her happy.

Soon after she thanked Kimihito for the wonderful time she had with him on their date and attempts to ask him for another one but panics after getting embarrassed. She's later informed about the three dangerous extra specie girls coming to the country. [11]

She recently appeared at the end of chapter 46 when the MON came to Kimihito's house. When out of nowhere Curie attacked Zombina.

Monoeyes (, Monoai, lit. "Single Eye species") are humanoid beings that possess the notable feature of only having one eye.

Monoeyes are able to see objects up to 2km away without assistance; however, they have poor depth perception, making it difficult for them to navigate 3-dimensional spaces, and their eyes require constant protection from harsh environments as their size makes them susceptible to dryness and allergies.

Retrieved from "https://dailylifewithamonstergirl.fandom.com/wiki/Manako?oldid=61631"
Community content is available under CC-BY-SA unless otherwise noted.