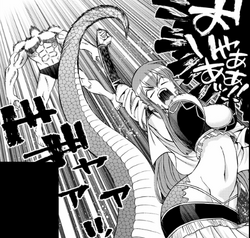 The Megaton Punch is a one-panel gag that appears frequently throughout anime and manga as a punch that is so over the top that it is considered comedic despite the implied power and damage such a punch would usually result in.

Retrieved from "https://dailylifewithamonstergirl.fandom.com/wiki/Megaton_Punch?oldid=53375"
Community content is available under CC-BY-SA unless otherwise noted.