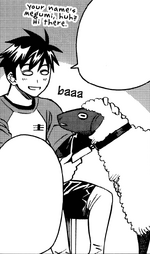 Megumi is a dairy sheep at the Farm Kimihito Kurusu, Papi and Centorea Shianus visited and worked at.

While helping Merino, Kimihito was introduced to Megumi and taught how to milk her, the lessons of which he later used to milk Cathyl when she abducted him.

Retrieved from "https://dailylifewithamonstergirl.fandom.com/wiki/Megumi?oldid=12428"
Community content is available under CC-BY-SA unless otherwise noted.