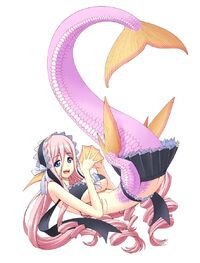 The mermaid civilization is one of the largest extraspecies civilizations, and would seem to be present throughout most of the Pacific and Atlantic oceans, if not others. Given the sheer size of this range, mermaids are likely under a number of cooperative kingdoms, and not just a single monarchy. Mermaids incorporate into their society many other marine extraspecies, the Fishfolk most notably.

In modern times, Mermaid society is dealing with an "elopement problem". As, due to the society's fascination with The Little Mermaid tale and "tragic romance" involving another species, the number of young mermaid women meeting humans by the seashore and eloping with them is rising dramatically; resulting in a dwindling population.
As a result, Mermaid-Human relations have soured and driven at least some mermaid houses to seek isolation from the human world. 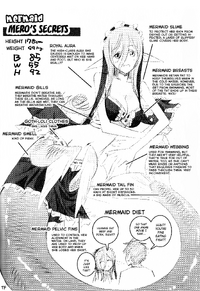 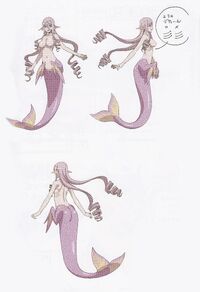 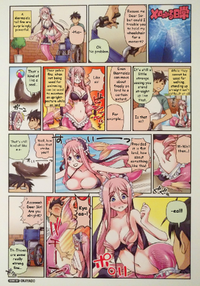 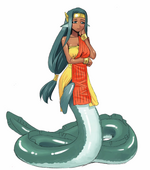 Eel Mermaids (ウナギ系, Unagi-kei) are Mermaids with long bodies like the lamia. Unlike most mermaids, they have no trouble living on land. This because they produce even more mucus than standard mermaids, though as a result, they have trouble wearing most clothing materials. Their massage techniques utilizing their mucus are highly advanced, and their mucus possesses cosmetic properties as well, making them popular among other mermaids. They have a tremendous amount of stamina and often stay up all night, consequently making them sleep-deprived most of the time.

Freshwater Mermaids (淡水種, Tansui-shu) are a subspecies of mermaids. Unlike standard mermaids, which reside in warm ocean waters, these mermaids regularly travel from rivers to oceans and back again. These stoic mermaids never give up their journey regardless of any fierce rapids or waterfalls that may stand in their way. Because of this, they have slim and fit bodies. Their colors are more muted than those of standard mermaids. 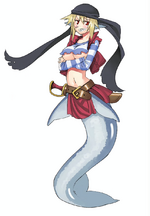 Shark Mermaids (鮫系, Same-kei) are a mermaid subspecies armed with sharp teeth and having the lower body of a shark. Shark mermaids are also entirely carnivorous, a rare trait among the predominantly omnivorous mermaids. Their personalities are wild and aggressive. In the past, they engaged in pirate-like activities, but more recently they have begun to abstain from piracy. Like sharks, the skeleton in the lower bodies is made of cartilage, making them very delicate. They are mentally weak, as well.

Lamprey Mermaids are a mermaid subspecies closely related to Eel Mermaids. While they are known for their preferred diet of suckling blood from other beings, Lamprey Mermaids can subsist on the same diet as conventional mermaids.

In Japanese folklore, lampreys are called "Yatsume-unagi" (八つ目鰻, "eight-eyed eels"). The name is derived from the seven external gill slits which line each side of a lamprey's head section which, along with their actual eye, makes it look like they have eight eyes on each side of their face. Folklore in some other countries include the lamprey's nostrils in the count, calling them "Nine-eyed Eels" instead.

Yatsume is a Lamprey Mermaid. 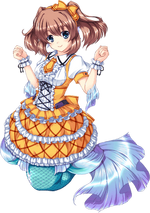 Tropical Mermaids are a rare subspecies of Mermaid found within tropical waters, usually near or within coral reefs. Capable of living in both fresh and salt waters, Tropical Mermaids are a minority race among the Mer-races but are widely famed for their beauty. The majority seem to lead pampered lifestyles because of this.

Rui is a Tropical Mermaid. 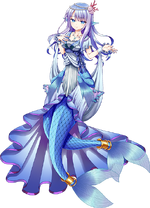 Sirens (セイレーン, Seirēn) are a subspecies of mermaids. They originate from Greek mythology and are widely known for being capable of singing songs so enchanting, that it could lure sailors to their deaths. They are also notable for having two fish tails as opposed to one.

The original Sirens were women with the lower half of a chicken who lived by the sea, luring sailors ships into the rocks surrounding their home.

Sein is a Siren.

Retrieved from "https://dailylifewithamonstergirl.fandom.com/wiki/Mermaid?oldid=62723"
Community content is available under CC-BY-SA unless otherwise noted.