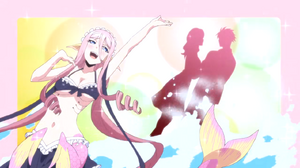 Thanks to her love of the story of Hans Christian Andersen's The Little Mermaid, Meroune Lorelei loves the notion of tragic love, whether it is unrequited love, her lover dying, or herself dying and leaving her lover behind.

Her love of the notion of tragic love is such that whenever a situation arises that even hints at a known tragic romance plotline she will lapse into an energetic daydream of the scenario and become increasingly "excited" as it plays out in her mind.

This romance is of love shared but not expressed between individuals due to an existing impediment. Such impediments can be but are not limited to one individual already being married or social laws disallow their joining (common in homosexual, interracial or love involving age-difference or social status).

This romance is of love between individuals where one individual is dying. As opposed to "battlefield death" or "accidental death", death in this romance is an extended ordeal where the individuals know that one of them is dying but they continue their romance anyway. As such "death due to sickness" is most commonly featured (with Cancer being prominently used in modern time) however death due to "magical curse" or "impending destiny" (where the character is "fated" to die) are also sometimes used.

This romance involves an individual being forced to endure various plights in order to retain their love. Most often in these romances the individual will suffer plights based on degrading humiliation and social-razing; demonstrating resilience in character and strength of will as they lose everything in their world for the chance to continue their love.

This romance involves an individual having lost their lover (usually due to death or another reason to explain an extremely notable absence) but possesses an item or artefact that directly arose due to that love. Most often these artefacts can be heirlooms such as photos or letters, or a literal production from their love in the form of a child or children.

This romance involves an individual being mentally and spiritually broken into accepting another individual as their "love" even if they do not actually love them. Most often seen as the primary tactic used by villains in romance stories, in a tragic romance their efforts work and the broken target of their affections deign to live the remainder of their lives with the villain. The psychological term for this event is known as Stockholm Syndrome.

This romance involves individuals being actively separated by outside parties, thusly making it difficult for them to continue their love. This most often happens in romances involving opposing social statuses, the notion of "duty over love" (eg warrior/royalty couples) or characters with disapproving elders/parents/superiors.

Retrieved from "https://dailylifewithamonstergirl.fandom.com/wiki/Meroune%27s_Tragic_Romances?oldid=55736"
Community content is available under CC-BY-SA unless otherwise noted.