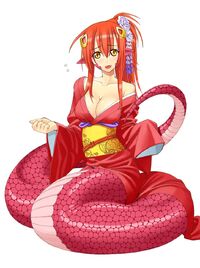 These are the various relationships Miia has or had over the series.

Miia is the first monster girl to move in with Kimihito. They met when Ms. Smith/Sumisu made a mistake when trying to locate Miia to her host family. While they were talking, Miia started to shiver due her being coldblooded, he started to cover her snake half with a blanket and gave her a smile. This act of kindness touched her heart and she's been in love with him ever since. Out of all the girls that stay with Kimihito, Miia is unquestionably the most outspoken about her feelings towards him and (in no small part due to her Lamia heritage), the most vocal in her desires to be his bride, and be his number one at all costs.

Ms. Smith is Miia's coordinator, but made a mistake about Miia's host family, so she ending up living with Kimihito instead. Miia does not regret this decision however, and appears to get on fairly well with Smith. Nevertheless she will not hesitate to shout at her when she feels that Smith is getting too close to Kimihito, and as illustrated when Smith was supposed to take care of a sick Kimihito (only to make a cup of coffee and promptly doze off) views Smith as lazy.

After their encounter, she despises the couple after they insulted her, as she almost lost her temper.

Miia attempted to rescue a little girl stuck in a tree, however it backfired as the lamia unwittingly scared her causing her to fall off. Miia tried to get the little girl grab her tail but it was out of reach.

Miia initially disliked Kasegi filming her and taking her skin that she shed. After Suu blew Kasegi's cover, Miia along with Centorea and Mero became hostile towards him. Miia prepared to lash Kasegi with her tail, but Kimihito attacked the con man instead.

Miia unwittingly caused Ren Kunanzuki to faint from the lamia's horrible cooked food that the human girl claimed to smell like "bug spray and dung". The human girl insistingly ate some of it staining her school uniform during the process.

Miia tends to view the other girls living with Kimihito as rivals, yet she seems to be able to live with them peacefully on a day to day basis, as long as they don't get too close to Kimihito. She sometimes insults them, though.

After discovering that Papi is the same age as her, Miia immediately views her as a rival for Kimihito's affection and regards her with suspicion. However, due in large part to Papi's childlike mentality and general naivety, Miia's wariness of Papi has been diminished somewhat in favor of one characterized by maternal protectiveness.

The relationship between Centorea and her is what one may characterize as a friendly (albeit occasionally heated) rivalry. While Miia sees her as a rival for Kimihito's affections, she genuinely respects Centorea for her integrity and fortitude and often seeks her help when troubled about Kimihito or one of the other girls staying at their home.

After being assaulted by a dehydrated Suu in episode 5 (while trying to protect her no less), Miia generally views Suu with ambivalence. While she frequently treats Suu with maternal affection due to her childlike nature, Miia views her with suspicion due to her tendency to assault friend and foe alike when dehydrated and signs that she likewise harbors romantic feelings towards Kimihito.

Initially, Miia viewed Meroune as a love rival especially when Kimihito was carrying the mermaid bridal style even after the lamia broke her wheelchair unwittingly. Later, Meroune said that she had no intention to woo Kimihito but Miia still counted her as threat to him. Because of her "tragic love" fetish Miia was scared that Meroune may cross the line of killing Kimihito.

Of all the residents at Kimihito's residence, Miia views Rachnera with the most distrust and hostility (not least because of Rachnera's hobby of regularly tying up the other girls for her own amusement). To exacerbate matters even further, Rachnera is by far the most aggressive in her efforts to seduce Kimihito thereby causing Miia to view her as her most dangerous "love rival". However, despite these feelings of antagonism, Miia does genuinely care about Rachnera as evidenced by her concern in Chapter 27 when Rachnera's original host family (who previously sold her to the criminal underworld) seeks to have her returned to their care.

Miia doesn't see her as a love rival, but still treats the Dullahan with a pinch of salt.

Whilst the exact nature of their relationship is unknown, Miia is generally freaked out whenever Lala takes off/loses her head (in no small part due to the fact she once saw a cross section through Lala's neck). She also once gave the Dullahan (unintentionally) food poisoning due to her bad cooking skills. She also at first disliked Lala due to the fact that she was gonna take his soul but after finding out it was a rouse she said she wouldn't mind her staying here as long as she doesn't hurt Kimihito.

She doesn't like it when she sews her parts back on.

After their last interaction, Miia is shown to despise Draco.

Miia's Mother loves her daughter greatly. Her entire visit being a ploy to remove her rivals and help her take Kimihito for herself. The whole time Miia fights to stop her from taking Kimihito she is nothing but friendly towards her. She does not hold a grudge afterwards either. She does anger her daughter by attempting to sleep with Kimihito herself though.

Retrieved from "https://dailylifewithamonstergirl.fandom.com/wiki/Miia/Relationship?oldid=49847"
Community content is available under CC-BY-SA unless otherwise noted.