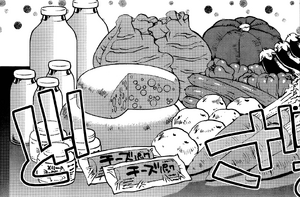 Milk is a white, edible liquid secreted from the mammary glands of female mammals. It's primary purpose is to nourish infants too young to eat conventional food. Due to its nutritional value and taste, animal milk (especially that of cows) is a popular beverage amongst developing and even mature humans.

Aside from being drunk directly, milk can be produced into a wide variety of foods, such as Cheese, Butter, Ice Cream, and Yoghurt, or even added to existing products to improve the taste, such as coffee. Any produce made from milk is called “dairy” and farms specializing in breeding milk producing animals, such as goats and cows, are therefore called “dairy farms”.

Amongst Liminals, both Milk Minotaurs, Pans, Satyrs and Dairy Breed Centaurs are known to lactate permanently, even outside of pregnancy. As revealed in Chapter 71, however, Dairy Breed Centaur milk has sometimes has a side effect: the strong maternal hormones in the milk can revert the drinker to a brief infant state in which he/she behaves like a baby. Even persons of extraordinary strength of will like Kimihito are powerless against it.

Minotaur milk is noted to be especially delicious and nutritious, with there even being many Minotaur Milk Connoiseurs. And since the demand is much higher than the supply, it is a fast selling commodity that fetches a high price. Also, since it is technically not cow’s milk, it can therefore be drank even by people with a milk allergy.

Likewise, both Minotaur milk and Pan milk are nutritious enough and close enough to mother's milk that it is believed to be almost perfect for a human baby's needs. This, along with bypassing the adverse of effects of individuals who are lactose intolerant, makes Minotaur and Pan milk superior to cow's milk and human milk.

Merino reveals that recently, there has been an issue of new human mothers having problems producing breast milk themselves for their babies, and have learnt of the superiority of Minotaur and Pan milk. As such, they have been been sending orders to Dairy farms handled by female Minotaurs and Pans to deliver their milk to them for a price. This has been done in secret due to the Extra-Species Bill regarding complex ethical issues.

Retrieved from "https://dailylifewithamonstergirl.fandom.com/wiki/Milk?oldid=62450"
Community content is available under CC-BY-SA unless otherwise noted.