The Minotaurs (ミノタウルス, Minotaurusu) are a demihuman race with bovine attributes.

Affiliated with Greek mythology, Minotaur's possess cloven feet, horns, a tail, and are easily taller than an average human while also possessing greater physical strength that may rival a Centaur. There are two types of Minotaur, the lactating "milk producing" types and the aggressive "bullfighting" types. 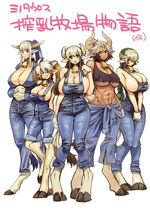 This subspecies of Minotaurs are the kind that produces a rich milk which is considered both nutritious and delicious. They usually have the coloration of normal farm cows and appear to have two shades of hair color, one light and one dark. Much like their bovine counterparts, female "milk producing" Minotaurs produce large quantities of breast milk. If they are not regularly milked, their breasts become swollen to the point of it being uncomfortable. In this regard, is also noted that industrial milking does not please this subspecies since it does not remove all the milk that they produce in their breasts. On the other hand milking massage tends to make them expel even more milk, however, this will make them enter into an orgasmic state and will create an affective bond with the milkers.

This subspecies of Minotaurs are considered brutish and knuckle headed, mostly bred for the likes of war or traditional "bullfighting", their coloration is a bit darker and possess a rather fit and muscular physique.

As specified in the manga, due to her having a heritage of bullfighting (or war-like) minotaurs in her genes, Cara is considered the closest to a "Bullfighting" Minotaur seen so far.

It is said to have the body of a cape buffalo. Its head is always pointing downwards due to its head being heavy. Its stare or breath could either turn people into stone, or kill them. The catoblepas is often thought to be based on real-life encounters with wildebeest, such that some dictionaries say that the word is synonymous with "gnu". Also known as an African version of a Gorgon.

In spite of this rumour, Catoblepas are generally lethargic/demure in nature and rarely display aggressive behaviours.

Ushiko is a Holstaurus and a member of the idol group ANM48 .

Zarella and Ricotta "lovingly" asking Kimihito to milk them.

Retrieved from "https://dailylifewithamonstergirl.fandom.com/wiki/Minotaur?oldid=63213"
Community content is available under CC-BY-SA unless otherwise noted.