Mokunaii the 11th is a Mummy that appears in Monster Musume: Everyday Life with Monster Girls Online.

As a mummy Mokunaii the 11th has bandages on her body. She has red eyes and long black hair. She wears a choker that attaches to her black dress, she wears a silver belt with a ankh. She has dark purple sandals on, and has her nails painted. 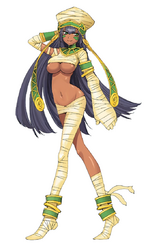 Mummys (ミイラ, Mīra) are a zombie subspecies from dry desert areas. Their arid environment keeps them safe from decay, and even without preservative measures, their bodies remain intact. However, their arid environment has also robbed their skin of its moisture, requiring them to take long baths to replenish their fluids. They also supplement this by sucking the life force out of young men to preserve their beauty, but this tragically functions only as a placebo.

Since many Mummies were ancient royalty or nobility in life, they often have difficult personalities.

Retrieved from "https://dailylifewithamonstergirl.fandom.com/wiki/Mokunaii_the_11th?oldid=59591"
Community content is available under CC-BY-SA unless otherwise noted.