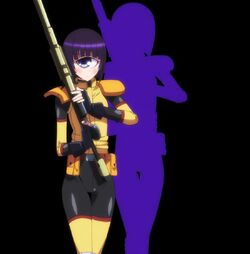 The Monoeyes (, Monoai?, lit. "Single Eye species") are humanoid beings that possess the notable feature of having only one eye.

Monoeyes are able to see objects up to 2 kilometers away without assistance; however, they have poor depth perception, making it difficult for them to navigate 3-dimensional spaces, and their eyes require constant protection from harsh environments as their size makes them susceptible to dryness and allergies. 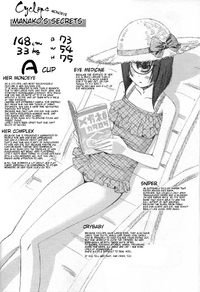 The One-Eyed Monk (一つ目入道, Hitotsu-me Nyūdō?) subspecies are Monoeyes who have converted to Buddhism. Aside from their mute status, they appear no different than the standard Monoeye, aside from the fact the glances they get from their single eye doesn't trouble them. However, because of this, they are very serious and can be hard on not only themselves, but on others as well.

They mainly use their eyesight to spot those who have neglected their training. 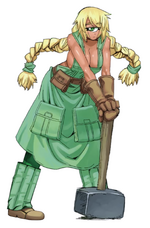 Cyclopes (サイクロプス, Saikuropusu?) are an unusually large Monoeye subspecies, whose special talents lie in smithing/metalwork. Their large eye allows them to accurately determine the temperature of the fire and iron, which is the source of their unique smithing techniques.Also unlike other subspecies, they are surprisingly well-endowed. Other Monoeyes view their special gifts (especially their breasts) with envy.

A rather well-known subspecies, they have been featured throughout popular culture. 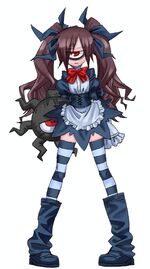 Backbeards (バックベアード, Bakkubeādo?) are a strange yet powerful Monoeye subspecies. They are capable of hypnosis by having someone stare into their eye, blind others with their glittering eye, and can even fire ocular laser blasts.

As a sacrifice to owning such great abilities, they have juvenile-like bodies, which can result in them being treated like children, a point of discontent for any Backbeard. It is because of this that Backbeards are incredibly suspicious, to the point of calling someone a "lolicon" and run in the opposite direction if someone shows them even the slightest of kindness.