Daily Life With A Monster Girl Wiki
Register
Don't have an account?
Sign In
Advertisement
in: Article stubs, Video Game 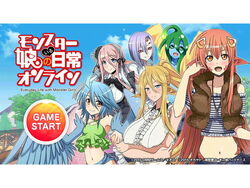 Although based on the manga Monster Musume: Everyday Life with Monster Girls the online game possesses an original story and original characters, where the player will participate as a Home Stay host for monster girls in accordance to the Cultural Exchange Between Species Bill.
As the game progresses, players can raise the intimacy level with their home stays, and ultimately trigger a “rewarding event.”

The game was shut down on the 22nd of November, 2016, at 12pm JST, however, while the game itself became inactive and no longer able to be played, the author of the Monster Musume manga, Okayado, has expressed interest in having the game's characters appear in his own works in the future.

The following will be covering the basics of the game in general. Check out the How to Play tutorial for more in-depth information about the game. Check out the Tutorial: How to Register on how to register.

Also due to certain similarities, some parts have been labeled with their respective equivalents from Kantai Collection, in case of curious Admirals stopping by.

The "battling" mode of the game. The player can send up to 5 monster girls on different maps, each with different objectives. These objectives may merely require the player to reach the end of the map, while some may also require an acquisition of certain on-map items.

In order to reach the goal, the player usually has to face other groups of monster girls to progress. While the mode's battles are randomized, the player is able to affect the flow with a limited amount of ally buffs and enemy debuffs. Monster girls can be acquired in this mode in form of drops.

This is where you can put your monster girls into groups. While all of the up to 5 groups can be send out on Outings, only the 4 last can be sent on Shopping trips. This is also the place where the player can level up their monster girls through Synthesis.

This is where you feed your monster girls after each Outing. The resources in the game are represented with 3 types of food: Meat, Vegetable and Bread. Each monster girl can only eat one type of food.

The most efficient free way of acquiring food in the game. The player can send out a group of monster girls on a shopping trip for a certain period of time. These shopping trips may be focused on Meat, Vegetable, Bread, or all of them. The amount of food that can be acquired on a trip depends on the number of monster girls that the player sends out.

The player can buff monster girl's stats through raising affection. In the game, this is achieved through applying different types of lotion for each of the girls. Each girl has their own particular affections spots, and applying lotion to these spots may gain the player additional affection points. Reaching certain affection milestones will grant the player cutscenes with the caressed girl. Also, while possible, don't go around groping their boobs or private parts, please. They don't really like it.

Monster girls can be sent out on Outings and Shopping trips if they have enough stamina. While Stamina can be regenerated naturally up to 100 points, this is where you can go beyond that limit. The player can put up to 5 girls to refresh themselves for 6 hours, raising each of their Stamina temporarily up to 200 points.

This is where monster girls familiar from the original manga give players different tasks relating to different aspects of the game. Completing each task rewards the player with food, items, or even new monster girls.

This is where players are able to acquire rare monster girls more easily. Players can do this by using either purchasable rubies or drop/reward tickets.

Randomly gives you a Normal, Medium or Rare ticket.

Randomly gives you a normal, rare or special care cream.

Randomly gives you a backscratcher, brush or feather duster

Randomly gives you an N, R, HR or SR accessory.

Recovers all food types by 1000

All statuses in argument battles are increased for all girls. Last 24 hours.

The next grocery lasts 1 second, regardless of duration

The next relaxation lasts 1 second.

Allows you to do a special 8-hour shopping trip that is more efficient than the 10-minutes trip and rewards you with either a backscratcher, medal or gem.

Gives you an extra flag for 23 hours

Okayado rescuing the Monster Girls after the game was shut down