Daily Life With A Monster Girl Wiki
Register
Don't have an account?
Sign In
Advertisement
in: Volumes

Monster Musume: Everyday Life with Monster Girls (モンスター娘のいる日常, Monster Musume no Iru Nichijou) Volume 3 is the third volume of the Monster Musume: Everyday Life with Monster Girls manga series. Containing four chapters and one bonus comic, this volume illustrates some of the issues with monster girls adjusting to society and covers the introduction of M.O.N..
Serialized in Monthly Comic Ryū magazine, the serialized chapters were collected and published in tankōbon volumes by Monthly Comic Ryū in Japan and later translated for an English release by Seven Seas Entertainment.

Volume three was released in Japan by Monthly Comic Ryū on the 13th, July 2013, and translated and released for English audiences by Seven Seas Entertainment on the 6th May, 2014. 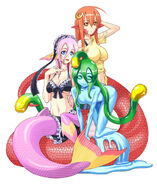