Volume five was released in Japan by Monthly Comic Ryū on the 13th March, 2014, and translated and released for English audiences by Seven Seas Entertainment on the 18th November, 2014. 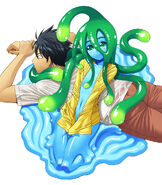 Retrieved from "https://dailylifewithamonstergirl.fandom.com/wiki/Monster_Musume_(manga)_Volume_5?oldid=55029"
Community content is available under CC-BY-SA unless otherwise noted.