Myuu (ミュー), aka Dragon Maid Myuu, is a Ryu-jin that appears in Monster Musume: Everyday Life with Monster Girls Online.

As the player's administrator and agency liaison, Myuu keeps the player informed of new events and newly arrived homestayers attached to the Interspecies Cultural Exchange Program.

Myuu is a woman of slim build and fair complexion. Possessing silver hip-length hair and blue eyes, Myuu possesses dark silver scales along her tail and aquamarine scales along her face and ears. Protruding from under her fringe, she possesses a pair of double-horns matching the same complexion as her tail.

Myuu seems to possess a hobby in photography, often taking photographic "memories" of interactions with various exchange participants using a 35mm film camera of unknown description. This might be a reference to a Ryu-jinn's longevity, often times outliving other beings, and so she keeps photographs to remember her time with those that have long passed away. More than once Myuu has lost her "memories" with certain exchange participants and has requested aid from the player in helping her retrieve the film negatives before they are lost in the wind.

After opening the twitter page on 18th October, 2015, Myuu posts some tweets introducing some of the homestay girls and then announces the open date of the game to be December 21st, 2015.

After Myuu wishes the player a merry christmas eve, informing them that herself and the other girls had a wonderful night and that they wanted to go out again, she discovers that the Yeti Miti had gone out into the city and gotten lost and she requests help from the player to find the lost exchange student as she herself was unfamiliar with the city.
Shortly afterward, Myuu is informed that the werewolf girl Lyca had undergone a transformation and she implored the player to help her find the werewolf-girl before the town panics.

After an adventure when the gnome Tierra tells Myuu the location of her ore mine, Myuu has the player help her help Media find her glasses following Hinamatsuri and White Day. Myuu then requests aid from the player in fulfilling the request of Nemes the sphinx, collecting four-leaf clovers for Sharon and bolstering Nia's confidence in three separate incidents.

When Keros misunderstood her host and in a tantrum ripped up the photos Myuu had of her, after solving the misunderstanding, Myuu was aided by the player in searching for the photo pieces. Shortly thereafter the Easter Bunny Chocola called her to gather orders for easter chocolate and then Tatake, who had always been dissatisfied with the difference in the treatment of humans and liminals in society, gathers other liminal friends and away from her homestay house to make a “Raccoon Improvement Committee”. Myuu requests the player's aid in bringing her back home.

When the photos in Myuu's album were blown out by the wind, Miti, who was looking through the album when it happened, felt responsible and went searching for them with the player's help. Shortly thereafter, after a misunderstanding, the Medusa Shiana ran away because of something Myuu said but was returned home with the player's help.

When Kuu went to the forest in search of “Kashiwa-no-ha”, Myuu recruits the player to help her collect them and bring her home. Furthermore, as the player already had a history with the vampire Pirati while she, herself, did not know her that well, Myuu asks the player to accompany the vampire girl when she left to wander the city in a depressed state.

Discovering confetti flying around while drying laundry, Myuu realizes that it was pieces of photos of herself and Suzie and asks the player to help her retrieve them.
When a bunch of beautiful stones fall from the sky, the Inaba Hare Hakuto announces her desire to collect these stones to "give back to the moon", Myuu arranges a city-wide event to help her collect them.
When Araya goes after some of Myuu's photos after they were stolen by a crow, Myuu asks the player to also help and then asks further aid after picking Flare up to take her home and needing aid in finding a route back to the house due to the usual direct route being blocked.

After receiving an order from the "Great Tengu", Shizuka was tasked with gathering leaves to create a mound. Myuu creates a city-wide event to aid her in her task. Shortly thereafter, after offering to help Sasami the Zashiki Warashi into a room, a mistake causes the sprite to send Myuu's precious photos flying. Myuu once again asks the players to help her retrieve them before they are lost.

November 22, 2016, 12:00, Myuu announces the closure of Monster Musume: Everyday Life with Monster Girls Online and thanks the players for their warm support from the beginning to the end of the service. 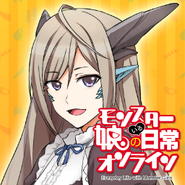 Ryu-jin (龍人, Ryūjin) are a subspecies of Dragonewt. Unlike them however, they resemble Eastern Dragons, and as such, they have deer-like horns and long tails. Yet unlike Dragonewts, they have no wings, making them appear to be lizardmen at first glance. They possess an immense vitality, and live much longer than most humans, up to ten times a normal human lifespan. Like Dragonewts, their reverse scale are their weakness.

Retrieved from "https://dailylifewithamonstergirl.fandom.com/wiki/Myuu?oldid=62953"
Community content is available under CC-BY-SA unless otherwise noted.