Nega-Suu is a giant Black Slime that stowed away aboard a cargo container ship to Japan. Upon discovery, the President of the Black Lily Advanced Materials Laboratory attempted to transport her to his facilities without the government's notice but a chance encounter with Suu saw Nega-Suu escape her transport truck and enter the water canals around Tokyo. An aggressive and stronger slime, Nega-Suu found Suu's unique experiences desirable and intended to draw Suu to her and absorb the younger slime's body into her own; eating the smaller slime's core to gain her experiences and abilities.

Not much is known about Nega-Suu's personality, or if she is even fully sapient. What is known is that she is a highly aggressive predatory Slime, who is extremely determined to absorb Suu to add to her own capabilities. Due to this aggressive and determined nature, Nega-Suu does not seem to care about the repercussions of the damage she does, even if that includes the deaths of others. Thus Nega-Suu can easily be regarded as one of the most vicious, cruel and dangerous Liminals that Kimihito and his houseguests have encountered so far.

Despite her malevolence, Nega-Suu also seemed to develop a softer side of her personality later on, because in Chapter 66 it can see how she read a book in the captivity of the Black Lily Laboratory, which shows an open interest in this activity. It can be assumed that the main reason for this activity is to allow Nega-Suu to gain experience on its own, which makes it unnecessary to absorb an intelligence Slime. Later, Nega-Suu created dozen of new humanoids Slimes, although the reasons for this creative, perhaps even maternal act are completely unknown.

Since Black Slimes are created when the home of normal Slimes are polluted with toxic waste, it can be assumed that Nega-Suu originally had another personality, as Suu is also known that certain substances such as poisonous plants can change your personality for a short time.

At some point, Nega-Suu stowed away on a freighter owned by Black Lily Advanced Materials Laboratory, in an attempt to enter Japan for reasons unknown. The crew of the ship found her in one of the containers, and managed to capture her inside a tanker for transport, so she could be safely studied.[2] 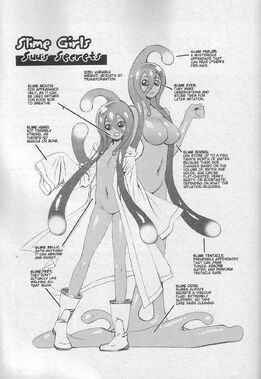 The Slime (スライム, Suraimu) is a liminal race whose bodies are composed almost entirely of a gelatinous substance. This particular species is a rare, almost unheard of, variety of Slime that mimics the appearance of a human woman.

Retrieved from "https://dailylifewithamonstergirl.fandom.com/wiki/Nega-Suu?oldid=62049"
Community content is available under CC-BY-SA unless otherwise noted.