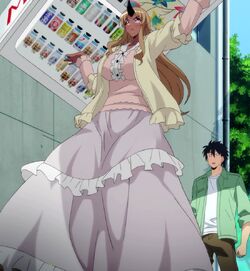 Ogres (オーガ, Ōga) are horned humanoid beings that possess the notable feature of not only great size, but phenomenal strength.

While many of their depictions in mythology may not hold true to how they are in reality, Ogres are indeed very tall in stature, ranging from two to three meters (6'6"-9'10"), and possess incredible strength. Thought to live in mountainous areas or wastelands, most Ogres have a single large horn protruding from their head and tend to have thick, tanned skin. Despite their large size, many ogres are laid-back and carefree. 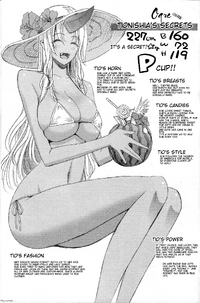 Oni (鬼) are a smaller Ogre subspecies. Aside from their colorful skin ranging from red to blue and two small horns, Oni are genetically no different from standard Ogres. Standing only two meters tall (6'6"), they are slightly smaller than Ogres, making them the smallest of the Ogre subspecies, though they are still larger than the average human.

Red Oni are thought to be crybabies and Blue Oni are considered self-sacrificing, but it is unclear whether or not there is any truth to these claims. It is customary for Oni to dress in tiger-striped clothes. 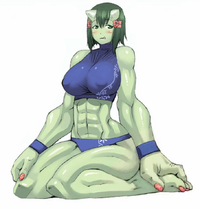 Trolls (トロル, Tororu) are a very muscular Ogre subspecies. Stronger and larger than regular Ogres, Trolls can reach heights over three meters tall (9'10"). They have a greenish brown skin and one or two short, thick horns on their head. They have long, protruding lower canines. Both males and females are extremely well-muscled with massive limbs, but like standard Ogres, they are easy-going and carefree.

Because they are physically much larger than humans, they are unable to wear most clothes, leading to concerns regarding their inability to dress fashionably. 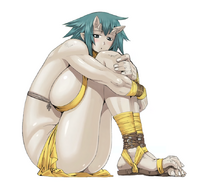 Gigantes (ギガンテス, Gigantesu) are an incredibly large Ogre subspecies. The largest known species to date, Gigantes averagely reach heights of over ten meters (about 32'7"). Because of this, Gigantes are truly giant. Because they can easily injure humans with their massive bodies if they are not careful,they spend their time quietly holding still if they have nothing to do.

Fashion is no concern to Giganti, as practically no clothes are large enough for them to wear, so they dress themselves in whatever rags they can to preserve some sense of public order and decency. They are not known to attack other creatures.