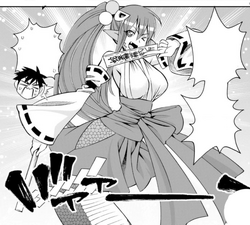 Onmyōdō Charms are magical charms and talismans used in spiritual divination and magical encantations. The charms are used as aids in exorcisms and spiritual protection.

The charms originate from the practises of Onmyōdō (‘The Way of Yin and Yang’); a traditional Japanese occult practise that entails a mixture of natural science and occultism. It is based on the Chinese philosophies of Wu Xing and Yin and yang, introduced into Japan at the beginning of the 6th century, and was accepted as a practical system of divination. These practices were influenced further by Taoism, Buddhism and Shintoism, and evolved into the system of Onmyōdō around the late 7th century.

Onmyōdō practitioners, Onmyōji, were specialists in magic and divination. Their court responsibilities ranged from tasks such as keeping track of the calendar, to mystical duties such as divination and protection of the capital from evil spirits. They could divine auspicious or harmful influences in the earth, and were instrumental in the moving of capitals. It is said that an onmyōji could also summon and control shikigami.

Retrieved from "https://dailylifewithamonstergirl.fandom.com/wiki/Onmyōdō_Charms?oldid=37744"
Community content is available under CC-BY-SA unless otherwise noted.