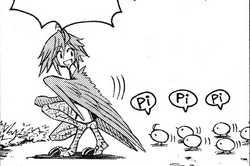 Papi's Chickies are a group of baby chicks that Papi took to playing with during her time at the Farm with Kimihito Kurusu and Centorea Shianus.

Possibly attracted to her bird-like appearance, the chicks followed Papi around the farm; resulting in the eventual discovery of Cathyl's discarded Breast Pumps.

When it came time to leave, Papi stubbornly refused to leave without her "chickies"; locking herself inside the hen house with them as Cathyl and Merino tried to convince her to leave.

One of Papi's Chickies, Piyoko.

Retrieved from "https://dailylifewithamonstergirl.fandom.com/wiki/Papi%27s_Chickies?oldid=41036"
Community content is available under CC-BY-SA unless otherwise noted.