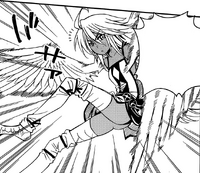 Papi's mother is in a monogamous relationship with her husband, Papi's father. Though she has asked other men whether they wish to mate with her, this is actually an inquiry of their intentions, and not a request for sex on her part. She has stated that she is faithful to Papi's father and does not want to be with other men.

This page deals with Papi's Mother's interactions with the other characters.

He is her husband and they love each other very much.

Her daughter. After a wild goose chase with Papi and Kimihito, who both thought that she was here to take Papi home, revealed that she just wanted the photo of her husband that she had accidentally sent. She looked just like Papi when she was young.

Retrieved from "https://dailylifewithamonstergirl.fandom.com/wiki/Papi%27s_Mother/Relationship?oldid=49298"
Community content is available under CC-BY-SA unless otherwise noted.