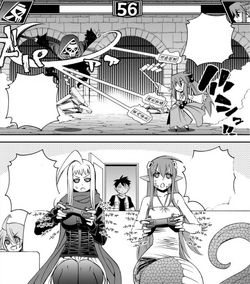 PlayStation 3 is a video game console developed by Sony Computer Entertainment. First released on November 11, 2006, in Japan, the console was later released in North America on November 17, 2006 and Europe and Australia on March 23, 2007.

The PlayStation 3 competed mainly against consoles such as Microsoft's Xbox 360 and the Nintendo Wii as part of the seventh generation of video game consoles. It was succeeded by the PlayStation 4 in November 2013.

Retrieved from "https://dailylifewithamonstergirl.fandom.com/wiki/PlayStation_3?oldid=54707"
Community content is available under CC-BY-SA unless otherwise noted.