Polt is a Kobold in a wolf-like form. She is the owner and coordinator of the extra-species health spa, Sports Club Kobold and the Kobold Stadium. She is also known to work with Smith by watching extraspecies that break the law and are on probation. She debuts in Chapter 17 to help Cerea, Miia and Mero lose weight.

As with all Kobolds, she appears as an almost human woman with a wolfish nose, tail, ears, and covered in fur. Her body, in accordance with her occupation, is very athletic; having muscular arms and legs and a trim abdomen. Her breasts, while still quite large and well-endowed, are more "normal" size, in comparison to other characters' more prodigious breast sizes. In her debut, she wears a midriff revealing black shirt with the sports' club's name on it and an unzipped track coat on top; denim hot pants; thigh straps and wristbands; a dog collar and athletic sneakers.

Like most stereotypical workout coaches, she has a very hyper and chipper personality that is willing to help anyone succeed in their exercise routine. She is always cheery and optimistic, and is always glad to help people work out.

After a medical examination reveals that a lack of outside activities and an abundance of Kurusu's food has set Miia, Centorea and Meroune's bodies out of balance. On arrangement with Ms. Smith, they head to the only known extra-species health club that was newly built, Sports Club Kobold, owned by Polt.

Here, Polt excitedly gives the girls a free preview so they can exercise and test out the facilities for her. Despite being relatively well furnished, once again it's revealed that demihuman extra-species are at times involuntarily discriminated against, as most exercise machines are designed for human-sized bipeds. As they are unable to use most of the exercise room (other than the free weights), they go swimming in the pool instead. Once there, she has the girls put on provided swimsuits suited to their body types and has them stretch out before entering the pool.

When Miia and Mero have a discussion about their swimming styles and make a bet with the winner having a technical carte blanche with Kurusu, Polt acts as the announcer. She soon finds out that despite being a heated pool for poikilothermic species, swimming still cools the body down gradually thus draining Miia of her energy and chlorine is toxic to merpeople which almost poisons Meroune. As such, she tells the group that she plans to add a sauna, make the pool warmer and treat it with ozone instead of chlorine for purification, and just keep the exercise machine room for bipeds.[1]

Some time later Kurusu and Suu come across Polt with Draco doing community service by fishing for American catfish in the river, which is an invasive species in Japan. When they ran out of bait she wanted to bury the ones they already caught until Kurusu asked if he could have them. She agrees and helps prepare the fish for transport.[2]

When Centorea challenged her mother to a jousting duel, Ms. Smith called Polt to borrow the use of Kobold Stadium, which is owned by Sports Club Kobold. Polt and Smith acted as announcers and commentators for the duel, which was televised by the stadium to the "thirty million centaurs around the country."[3]

Later on, while on a 'date' with Tio in the forest, Kurusu runs into Polt again, as she is overseeing the cleanup in Kii's forest as part of the community service for interspecies program. Unfortunately, due in large part to Doppel's antics the day before, her two probationary helpers Lilith and Draco are no shows. Instead, Kurusu ends up helping Polt clean while Kii relaxes with Tio.

Afterwards, the two break for lunch, Kurusu taking the liberty of informing Polt that Tio's 'Warm Aura' is dangerous. In spite of Polt's claims of mental fortitude, she is quickly defeated by Tio's scratching her ears and caught in her embrace as well while Kurusu continues to clean. After Tio tears out an old augur that someone dug into the forest and never removed, the entire area spontaneously turns into a hot spring thanks to a underground spring of water and the group decides to bathe in it.[4]

Although it took some convincing, Polt was able to get Kii to let her build a health spa in the area so long as it does not have a serious impact on the environment. Kurusu and Centorea subsequently use the sauna she built to trap Keira who had been chasing after them. [5]

Polt, alongside several other Kobolds, is seen in the Inter-Species Cultural Exchange Exposition hosting an event representing Sports Club Kobold. When Kimihito approaches her, Polt proceeds to demonstrate their latest product, a "Centaur Riding Machine". As Polt starts getting sweaty and worked up, she starts attracting the attention of numerous male attendees, unaware of what really draws them towards her.[6]

In Chapter 64 it is revealed that Polt and Poltfan had married and were supposed to be helping out at the Sno Ball Hot Spring Resort but were on a business trip to the states to open up gyms and do sports related business (with Poltfan acting as her official interpreter), leading to Kimihito and his homestayers to cover until they got back. 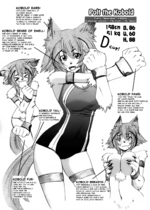 Retrieved from "https://dailylifewithamonstergirl.fandom.com/wiki/Polt?oldid=62677"
Community content is available under CC-BY-SA unless otherwise noted.