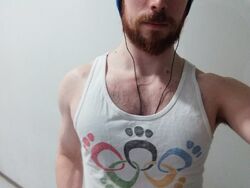 Poltfan is a fan translator for Monster Musume: Everyday Life with Monster Girls, an exercise enthusiast and an avid fan of Polt the Kobold.

Originating from Columbus, Ohio, Poltfan gained an MEXT scholarship in Japan and currently studies/lives in the country.
He first began reading Monster Musume on the 4chan discussion boards while still living in Columbus and started a twitter account to chat with the manga's creator, Okayado.
After tweeting some questions about his favourite character, Polt, to which Okayado replied, Poltfan became a fan translator when the then active fan translator on 4chan wanted to quit due to loss of interest.

Learning of the manga's offer to make people background characters in the chapter, Poltfan took a selfie of himself at the gym as one of the last Mob Character applications and discovered that he had made it into the manga when he picked up the Ryu Magazine issue for Chapter 43.

Retrieved from "https://dailylifewithamonstergirl.fandom.com/wiki/Poltfan?oldid=57889"
Community content is available under CC-BY-SA unless otherwise noted.