"Pleased to meet you... I am Rachnera Arachnera. I assume this is the first time you've seen an Arachne? Fufu... are you scared?"
― Rachnera introducing herself to Kimihito.[1]

Rachnera Arachnera (ラクネラ・アラクネラ, Rakunera Arakunera) is an Arachne and the sixth girl to move in with Kimihito and fifth girl to officially do so. Due to their fear of her, her original host family had sold her off to Kasegi, who used her and her webbing to make money. This, along with his cruel behavior left her with a deep hatred for humans. This behaviour changed after she abducted Kurusu and found out that he was a decent person who didn't discriminate against non-humans. Since then, Rachnera has been flirting with Kurusu while facing her fellow monster girls in the house, especially Miia and Centorea Shianus who see her as their love rival for Kurusu.

Rachnera has the body of a young woman with short lavender hair that covers the right side of her face. She has six pupil-less, monochromatic red eyes, and sharp and pointed teeth. Her most noticeable physical trait is the mass located at her humanoid buttocks which is that of a giant spider adorned with a large skull design on the back of its abdomen.

She has black carapace covering her arms from the shoulders down, and long fingers with gauntlet-like plating on her hands that end in sharpened points.

Her usual attire consists of a revealing halter top with shoulder-less sleeves, and black and gold loin cloth with a slightly-frilly white trim. Her outfits change more often than most of the other girls and are usually more revealing or mature.

Most of Rachnera's personality seems to be determined by her bad experiences with humans. Because of this, she initially hated humans, and believed them all to be hypocrites. While she believed this by her outlook of Kimihito as well, she was shocked to find out his kindness was genuine. This changed her outlook significantly, though it did not completely change her.[1] Nevertheless, Rachnera still retains at least some of her cynicism as evidenced by her conviction that Kimhito, as a man, would inevitably cheat on his home-stays.[2]

One of the biggest impacts that Rachnera's past has had on her is a deep-rooted hatred of dishonesty in any shape or form. No matter how ugly the truth is, Rachnera would still prefer it over pleasant lies. This is demonstrated when she managed to goad Cerea into admitting she hates her. Rachnera was actually happy with this, despite Cerea standing up for her to Miia earlier. Rachnera told Cerea that if she dislikes her then she should do so openly.[3] One way to make her genuinely angry is to mock her history and motivations.[4]

Rachnera is extremely mischievous as evidenced when she gleefully traps her former host in her webbing after scolding her for not keeping her webs in one place .[5] Likewise, she greatly enjoys provoking others, displaying an innate talent for saying the right thing at the right time to cause cracks in almost anyone's composure. In this respect, Miia and Centorea make very easy targets for her due to their mutual dislike for her and highly sensitive personalities. [2] Rachnera also displays a pronounced sadistic streak given how she subjects Lilith to sexual torture and made members of her host family "subs" in her BDSM routines.[4]

Notwithstanding her frightening appearance and unsettling "hobbies", Rachnera possesses a very sophisticated and seductive personality. Of all of Kimihito's tenants, she consistently displays the most confidence and self-awareness in her sex appeal when flirting with Kimihito (particularly when compared with Miia's suffocating displays of affection and Cerea's bashful prudishness). Likewise, Rachnera is the most licentious of the homestays as evidenced by her conscious attempts to sexually arouse Kimihito, along with her unabashed enjoyment of acts of (accidental) perversity on Kimihito's part .[1] From what is shown, Rachnera greatly enjoys bondage, getting a great kick from tying her victims up in her own webbing, both sexually and non-sexually.[3][4] However, dealing with both Papi and Suu in the others' absence proved to be too exhausting even for her.[6] She is also revealed to be somewhat obsessive about perfecting her bondage technique, which annoys most of the other monster girls (except Suu, who cannot be bound, and Mero, who rather shamefully enjoys it) to varying degrees [7], though she seems to have exempted Kimihito from being webbed up in this fashion. However, she seems to include every monster girl who lives in Kimihito's home or is a possible rival as fair game, a fact that has Lala more than a little scared of her.[8]

She is implied to be somewhat lazy, and can frequently be seen slacking off. [9][4]

However, even despite her sinister traits, it is clear Rachnera's the most mature of all the home-stays, and can quickly discard her playful attitude and become very serious if the situation calls for it.[10] Most notably, Papi and Suu consider Rachnera to be their favorite teacher in the household, even more than Kimihito himself, due to Rachnera being the most knowledgeable and skilled at teaching.[11] Ironically, despite being built like a dangerous predator, Rachnera has great self-restraint, and Kimihito even noted that she's the only member of the household who has never genuinely harmed or endangered him, even by accident, which caused to her to become embarrassed.[10] It is also shown that she cares deeply for Kimihito as when Lala said that Kimihito was going to die, she angrily bound her in thread and threatened her not to speak so offensively in front of her.[8]

Despite all this, according to Lilith, Rachnera's strong personality is merely a façade she puts up. Rachnera pretends to be uncaring, however she is afraid of being rejected again for her features, and that she is very self-conscious about her appearance. Rachnera's angry reaction implies that there is some truth to those words.[4] In fact, when Rachnera gets intoxicated, she becomes much more emotional and honest about her true feelings.[12]

Even though Rachnera has been a member of Kimihito's household for a long time, she still has a very withdrawn and mysterious side. A clear example of this is that she didn't tell Kimihito about her past with Mr President at the beginning, but only when circumstances forced her to. In fact, it should be noted that Rachnera has said almost nothing about her past, even to those who are close to her, so that even the other girls who live with Kimihito hardly know anything about her.

Rachnera was originally sent to a host family of three, who were immediately fearful of her "monstrous" appearance when first seeing her.[5] Later while trying to climb up into the attic on an insufficient ladder, she was startled by the family's daughter and accidentally injured her with her claws. Because of this, they later illegally sold her to Kasegi, resulting in her developing misanthropy.

At some point Rachnera caught Killa in one of her traps which humiliated the Killer Bee. Since then Killa swore revenge against Rachnera.[15]

She was shown spinning webs around her host after his failed attempt at getting Papi's egg, and after learning about Kurusu's apparent selfless act, she gains some interest in him.

After kidnapping him and putting him through her trial to confirm that he was as bad as she thought all humans were, Kurusu's kind personality (and leg fetish for her spider legs) won her over. Ms. Smith agrees that they were at fault for the inconvenience, transferred her to Kurusu's household due to Rachnera's obvious (though not obvious to Ms. Smith that Rachnera was manipulating her) manipulating in the form of hinting that she was now homeless and needed a place which was heavily modified to a large size, which housed non-human girls,and it wouldn't be much of a life unless her host bore arachne no hostility. This event causes the chilling of Miia, Cerea, and Mero's woman's intuition.[1]

Of the monster girls, Rachnera is not as overly aggressive over Kimihito as the others partially stemming due to her earlier experiences with humans though she does accord him enough respect that she is completely comfortable in his presence.

She does pursue him on occasion, mostly to annoy her competition but the feelings are to some degree quite genuine, as she reveals when intoxicated on caffeine. [12]. While caffeine intoxicated, Rachnera cites his acceptance of who and what she is without reservation as one of his most endearing character traits.

Her main rivals are Centorea and Miia; the former, due to initial mistrust of one another, and Miia because she's the most possessive of the bunch. Most of the others tend to not show near as much concern.

When Miia, Meroune and Cerea were forced to exercise for gaining weight, Rachnera volunteered to watch Papi and Suu, taunting Miia that she can do it because she herself is not fat. When the rest left with Kimihito, Rachnera thought of "playing" with Papi and Suu with a menacing glee. However, this backfired as the energetic Papi and Suu proved too much for her to handle, causing Rachnera to quickly regret it.[6]

When Kimihito left on his own, Miia, Papi, Cerea, Mero and Suu left the house to secretly follow him. Rachnera seemingly stayed home after saying he's probably cheating on us to aggravate them, reasoning that he would do it since he's a man. However, unbeknownst to them, they were in turn secretly followed by Rachnera, wearing a form fitting suit made of her own silk.

When Miia left the rest of the group to spy on Kimihito and Smith in a love hotel, Rachnera revealed herself to her. Rachnera listened in on Kimihito and Smith using her thread, and planned to photograph them in the act to blackmail Kimihito into choosing her as his wife. When Miia wanted to come, Rachnera asked her if she could genuinely handle seeing her beloved darling making love to another woman. While temporarily shocked, Miia overcame it and then jumped on Rachnera's back and revealed her trust in Kimihito. Before they can do anything, Tionishia grabs them and pulls them into the room, after which they are held at gunpoint by a surprised Manako and Zombina.

Afterwards, Smith revealed to everyone that Kimihito had received a death threat, and the date was meant to flush out the perpetrator. Smith then asks the girls to go on dates with Kimihito so they can find whoever's responsible.[2] 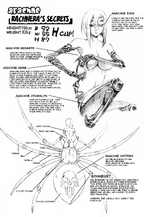 Arachne (アラクネ族, Arakune-zoku) are a demihuman race with the upper body of a human and the lower body of a spider.

The spider half is armored with hard but light exoskeleton, and their abdomen also has spinnerets and a book lung. Arachne possess sharp claws of the same exoskeleton material, as a means of attack as well as tools for the handling of the webbing, as they are quite dexterous.
Their silk is some five times stronger than steel and twice as elastic as nylon. Also, they are more akin to arachnids than mammals, and can be intoxicated by caffeine.