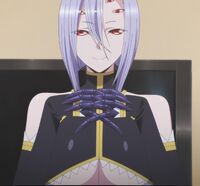 These are the various relationships Rachnera has or had over the series.

Rachnera's first impression of Kimihito was that his caring, selfless nature was a farce, and that he was only pretending to act kind to the home-stays. When she kidnapped him to "expose" him, instead, she realized he was genuinely caring towards monster girls, even those with an outwardly frightening appearance, thus she developed feelings for him, although she tends to be less extravagant about them than the rest. This, along with her maturity and full understanding of just how dangerous extraspecies are to humans, means that Kimihito receives much less injuries from her, making her the only homestay (aside from Lala) who hasn't harmed him in any way. She was even flattered and happy to learn that he actually found her legs quite attractive and sexy (due to his leg fetish).

Ren's family were the original hosts of Rachnera, and as she was lead to believe, very distrusting due to her eight-legged appearance. As revealed by Ren, during an incident where Rachnera accidently scratched the young girl, the parents sought to evict her, turning over her documents to Kasegi for a profit. This lead to Rachnera's budding distrust in humankind, though she displayed no outward aggression when the young girl showed up, hoping to take her back and prove that she could care for the arachne.

When her original host family sold her to the con man "director," he abused her abilities to produce silk for selling on the black market, taking in the profits in exchange for allowing the arachne to live with him. His taking advantage of her left Rachnera with a seething hatred of humans in general, to the point where she did not fear being deported for attacking the man, or anyone for that matter.

As her Interspecies Coordinator, Smith was the one who set up Rachnera with her original host family, and from their first seen interaction, the MON agent did a poor job of evaluating the exchange's aftermath. When Smith came to defuse the situation when Rachnera kidnapped Kimihito, the arachne persuaded the agent to assign her to the Kimihito household, and as usual, she went along with it without Kimihito's consent.

Like how she attacked Kasegi and showed little restraint when she kidnapped Kimihito, Rachnera did not fear repercussions when she strung up the Racist Couple and their gang, even threatening the man directly when he threatened to turn her in.

Much like Centorea, Miia appears to be rather distrustful of Rachnera and acknowledges her as one of her main love rivals. However, Miia does genuinely care about Rachnera as evidenced by her concern in Chapter 27 when Rachnera's original host family seeks to have her returned to their care.

Notwithstanding Rachnera's frightening appearance and the initial reserve of their other housemates, Papi and Suu have taken a liking in the Arachne ever since she first moved into the household.

The two hold Rachnera in high regard, valuing her knowledge and the time she spends helping them with their studies to the point she has quickly become their favorite “teacher”.

Rachnera also babysits Papi and Suu on occasion, seemingly getting along with their mischief.

Centorea greatly resents Rachnera seeing her as a contender for Kimihito’s attentions. Upon her arrival, she had suddenly become hyper-protective of Kimihito mainly due to Rachnera's previous attempt to kidnap him as well as her distinctive lascivious demeanor, something that would later on culminate in her stating her hate for the Arachne. Nevertheless, Rachnera dismissed her statement with a laughter and some advice on how to be more honest about her feelings.

As the series goes on, Centorea has come to trust Rachnera to some extent, even if still somewhat resentful.

Notwithstanding Rachnera's frightening appearance and the initial reserve of their other housemates, Suu and Papi have taken a liking in the Arachne ever since she first moved into the household.

The two hold Rachnera in high regard, valuing her knowledge and the time she spends helping them with their studies to the point she has quickly become their favourite “teacher”.

Rachnera also babysits Suu and Papi on occasion, seemingly getting along with their mischief.

Meroune has always treated Rachnera with ostensible kindness, at times addressing her in a very polite fashion.

When Meroune had apparently been kidnapped by Oct, Rachnera tried to make good use of her abilities in order to come to her rescue.

Lala has a somewhat fear of the arachne due to the fact that she "played" with the dullahan's headless body while the rest were out searching for her head, and subsequently when Rachnera threatened her with extreme bondage for claiming to have come to reap Kimihito's soul. However, she like Centorea agreed that if Kimihito was going to die, Lala might as well get it over with. Later she said she wouldn't mind Lala staying as long as she can "bondage her".

Rachnera had quickly taken a dislike to Lillith's mischevious nature, this behavior infuriated Rachnera prompting her to use her knowledge in rope-play in hopes that it could possibly change Lillith's nature for the better, in which they did. It was effective thanks to Rachnee's stance on Lillith's adulthood, which allowed her to be much more ruthless in her methods.

Retrieved from "https://dailylifewithamonstergirl.fandom.com/wiki/Rachnera_Arachnera/Relationship?oldid=57324"
Community content is available under CC-BY-SA unless otherwise noted.