Rei is a Ghost that appears in Monster Musume: Everyday Life with Monster Girls Online.

She wears only an old damaged pair of jeans. The rest of her body is naked. She has pale skin, long white hair, and blue eyes. 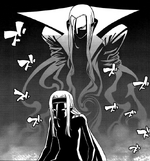 A Ghost is the soul or spirit of a deceased being that no longer has a physical body to "occupy" but is still present in the living world for varying reasons.

Able to alter their visibility and shape depending on how powerful they are, ghosts are reportedly able to display abilities that otherwise negate the laws of time and physics. They are most notably able to, depending on how strong they are, perform varying levels of telekinesis and take possession of other beings.

Reports of ghosts manifesting within human culture is widespread, dating back to pre-literate history. They are believed tend towards occupying particular locations, objects, or people they were associated with in life.

Retrieved from "https://dailylifewithamonstergirl.fandom.com/wiki/Rei?oldid=59277"
Community content is available under CC-BY-SA unless otherwise noted.