Rohe is a Ogre that appears in Monster Musume: Everyday Life with Monster Girls Online.

She has red skin, long pointy ears, and two small horns protruding out of her head. She also has red eye's, and her nails are painted black. 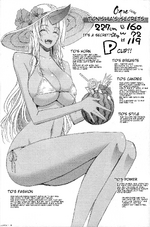 The Ogre (female: Ogress), is a humanoid race of sub-giants famously depicted in folktales and European mythology as violent, cannibalistic, man-eating monsters with downright retarded or stupid attitude.

While many of their depictions in mythology may not hold true to how they are in reality, Ogres are indeed very tall in stature, ranging from two to three meters, and possess incredible strength. Thought to live in mountainous areas or wastelands, most Ogres have a single large horn protruding from their head and tend to have thick, tanned skin. Despite their large size, many ogres are laid-back and carefree.

Retrieved from "https://dailylifewithamonstergirl.fandom.com/wiki/Rohe?oldid=59670"
Community content is available under CC-BY-SA unless otherwise noted.