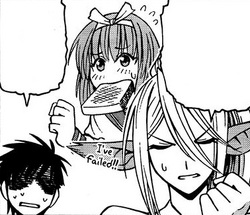 The Running with Toast Trope is a common media trope found in Japanese literature such as romantic comedies, school-life and/or Shoujo-oriented material.

Commonly used to establish a character, the image of the trope is that of an individual running down the street with a slice of toast hanging out of their mouth, dragging their backpack with one hand while trying to put on their jacket or sweater with the other in a last ditch attempt to make it to their destination on time (usually school).

While rushing down the street, they will usually bump/crash into another character in a manner that gets the plot started.

In addition to establishing the plot, it shows that the character possesses a minor flaw in social etiquette (on top of being late and rushing), due to the stigma in Japanese culture against eating in public (outside of an eatery). Such flaws are common in romance stories, demonstrating that their partner's love is strong enough to overlook such things.

Some of the earliest examples of literature that first used this trope were “Tsuraize! Boku-chan” (1975) and “Patty’s First Love” (1967), however, by the 1980's this trope had been used so much in modern material that it had become known as a cliche in modern writing practices.

Retrieved from "https://dailylifewithamonstergirl.fandom.com/wiki/Running_with_Toast_Trope?oldid=60765"
Community content is available under CC-BY-SA unless otherwise noted.