Sala is a Salamander that appears in Monster Musume: Everyday Life with Monster Girls Online.

Sala has long, pink hair, that is slightly messy, as well as pointed ears that poke out. Her arms are covered in scales, and stop slightly before her shoulders. Her legs also have scaled, but they stop, a little after her thighs. She is wearing a red dress, that stops a little above her thigh. She has a tail protruding from her tail bone. 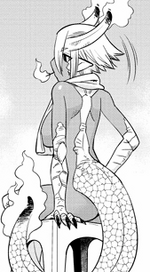 Salamanders are a group of lizard-like liminals who are known to allegedly live near volcanoes, can spew flames, excrete a type of poison to defend against predators, and are completely immune to fire and high temperatures.

Salamanders are considered one of four liminal species that embody the cardinal elements; alongside the Sylph (Air), Undines (Water), and Gnomes (Earth).

Retrieved from "https://dailylifewithamonstergirl.fandom.com/wiki/Sala?oldid=60797"
Community content is available under CC-BY-SA unless otherwise noted.