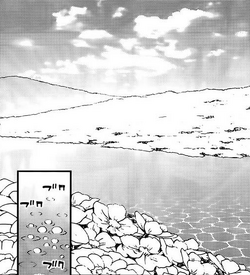 The Sanzu River (三途の川, Sanzu no Kawa) is a river that exists in Japanese Buddhist belief. Believed to be the boundary between the realms of the living and the dead, the dead must cross the river on their way to the realm known as Higan; an endless flower garden where there are no nights or days and no seasons, just a gentle warm light that covers the place as the dead await judgement on whether they will enter the Netherworld (following which they will eventually be re-encarnated and return to the world of the living) or Hell (where they will be doomed to remain for eternity).

The river's other bank (opposite Higan) is known as Gensokyo and is populated by dead spirits awaiting judgment to cross the river and Oni demons who serve Shozuka-no-baba, who demands money from all who arrive at her home on the river's banks. If she is not paid, she takes their garments and leaves them naked. To this end, Japanese funeral rites includes placing six coins in the deceased's casket so that they may be able to pay Shozuka and keep their garments.
In other tales, the river itself can be crossed by paying a Shinigami god to ferry them across the river. Once an individual crosses the river, they cannot return until their next life.

Based on Buddhist beliefs, how easy the dead's transition across the river is, whether it be via a bridge (boat), a ford, or wading through snake-infested waters, depends on how well they lived their life based on their deeds. To this end, all dead must undergo judgment from the Ten Kings of Hell. The first judge, Shinko-o, is encountered on the banks of Sanzu. If the dead are found innocent they can walk atop a bridge to cross the River Sanzu to meet the next King of Hell, Shoko-o. The guilty, however, must swim across the river's deep water or, for the less guilty, must ford a rapid stream.

Retrieved from "https://dailylifewithamonstergirl.fandom.com/wiki/Sanzu_River?oldid=37673"
Community content is available under CC-BY-SA unless otherwise noted.