As a Heavyweight Centaur she has a muscular build, she has brown eyes, light skin, a snow white fur coat and long blonde hair with curled ends. She wears silver and pale blue bikini armour. She keeps a flower in her hair.

Due to her family clan being knights for generations, Shaia has strong pride in being a knight and always wears her armour (only taking it off to bathe and sleep). As a devoted knight, Shaia devotes herself to following the knightly code of Chivalry by being honorable and virtuous and helping those in need of assistance.

She enjoys watching historical dramas and is secretly proud of her golden hair. 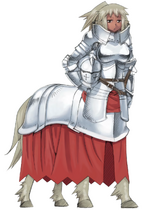 Heavyweight Centaurs (重量種, Jūryō-shu?) are the most muscular of the Centaur subspecies. They are so powerful that they can move around unimpeded even while wearing heavy armor. However, since they rarely have opportunities to wear armor in modern times, they apply their strength to farming and agriculture. They are the largest and most muscular of the centaurs, and their legs are far thicker than those of other centaur subspecies. However, most are gentle, good-natured, yet absent-minded and they are often dim-witted.

Retrieved from "https://dailylifewithamonstergirl.fandom.com/wiki/Shaia?oldid=62933"
Community content is available under CC-BY-SA unless otherwise noted.