Sharon is a young woman of average size and has snow white hair. As a Pan Faun, she has ram horns protruding from her head, as well as sheep ears, a tail, and reverse-jointed-hooved legs. Her body is also covered in a continuously-growing layer wool which must be periodically shaved away for hygiene and practicality purposes. While in the past they may have maintained a short layer of wool to cover themselves and otherwise gone nude, in modern times Pan Fauns and Satyrs seem to prefer to keep a short layer of wool on their legs, forearms and neck and have the rest of their body completely shaved bare like a human's; wearing conventional clothing to maintain modesty (although, in Sharon's case she prefers to have her neck and arms completely shaven as well, leaving only her legs still covered).

Sharon wears a dress of Country Lolita design with a green and red-rose theme.

Sharon is a quiet, well mannered woman, skilled as a domestic engineer and serving as a "maid" of the household.
Due to her people's association with "virgin purity", Sharon tries to maintain a chaste demeaner at all times. However, she is completely devoted to her "husband" and serving their whim.

She immediately designates the householder as her husband and devotes herself completely to serving them. 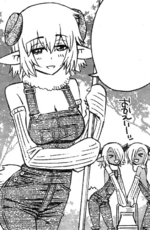 A Pan Faun is a demihuman race possessing characteristics of a sheep, including a pair of curled horns on the head, a small tail, ungulate ears, and hoofed feet, and they are a tad shorter than the average human.

Presumed to be a subspecies of Satyr or Minotaur, wool grows out of every surface of their body, excluding the hooves, hands, fingers, and face. If left unchecked, this wool will grow at enough of a pace to become unbearable to the individual in question without occasional shearing. Pan fauns are, true to their nature, shy and sheepish in general, and see the shearing process as one of extreme embarrassment. As expected of the symbols of virginity (the sheep), they are all protective of their chastity.

Retrieved from "https://dailylifewithamonstergirl.fandom.com/wiki/Sharon?oldid=62919"
Community content is available under CC-BY-SA unless otherwise noted.