Shiana is a Medusa that appears in Monster Musume: Everyday Life with Monster Girls Online.

As a Medusa type lamia she has snakes for hair in twin tails. And she has a dark green snake lower half. She also has red eyes. 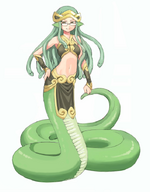 Retrieved from "https://dailylifewithamonstergirl.fandom.com/wiki/Shiana?oldid=58972"
Community content is available under CC-BY-SA unless otherwise noted.