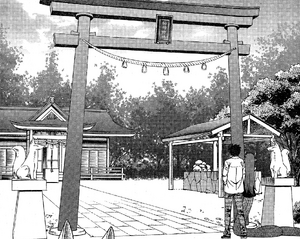 A Shinto Shrine is the principal place of worship for a kami god/spirit in the Shinto religion in Japan.

As shrines are private institutions, they are supported financially by the congregation and donations from visitors. As a further means of income, some shrines host Summer Festivals to attract further visitors.

One such shrine that Kimihito Kurusu and Miia visited while exploring the Onsen Town during their stay had fallen on financial hard times due to lack of visitors. The shrine's houseguest, a Kitsune named Luz Ninetei, attempted to attract attention for the shrine by transforming into various monsters before Kimihito, Miia and Rachnera helped her set up a public performance to more successfully attract new visitors.

Retrieved from "https://dailylifewithamonstergirl.fandom.com/wiki/Shinto_Shrine?oldid=56675"
Community content is available under CC-BY-SA unless otherwise noted.