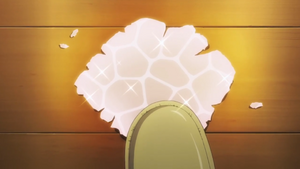 Made almost entirely of scales, these scales protect the body of the snake, aid it in locomotion, allow moisture to be retained within, can alter the skin's surface characteristics such as roughness to aid in camouflage, and in some cases even aid in prey capture.

The moulting of the skin occurs regularly (occurring around once a month, lasting around a week) to replace old or worn out scales, dispose of parasites and is thought to allow the snake to grow.

Snakeskin leather is regarded as an exotic product alongside crocodile, lizard, ostrich, emu, and camel skin. It is used to make clothing such as vests, belts, boots or shoes or fashion accessories such as handbags and is used to cover the sound board of some string musical instruments, such as the Banhu, Sanxian or the Sanshin.

Retrieved from "https://dailylifewithamonstergirl.fandom.com/wiki/Snake_Skin?oldid=18269"
Community content is available under CC-BY-SA unless otherwise noted.