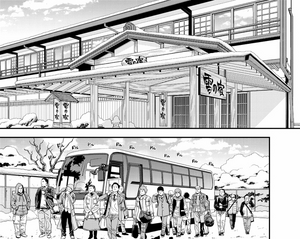 The Sno Ball Hot Spring Resort (雪の宿, Yuki no Yado, lit. The Snow Inn) is a hot springs Ryokan run by the Yuki-onna Yukio and her human fiance.

A state-of-the-art facility, following the public revelation of liminal cultures and the commencement of the Cultural Exchange Between Species Bill the onsen was renovated to include new faculties catering towards multiple liminal species. The Ryokan now also hosts "The Dating Pool" mixed-bathing couples event; an extra-species "meet-and-greet" event aimed at aiding liminal beings and humans to intermingle. As a result, the Ryokan has become famed as a pseudo "match-making" location for those wishing to find homestayers and homestay hosts for the cultural exchange program.

Refurbishing the resort for Liminals required instituting mixed-bathing. This was the only way for the resort to have the baths big enough to accommodate the larger species, while working within the square footage they already had.

While possessing state-of-the-art facilities, the resort fell into obscurity due to its mixed-bathing policy (which is unpopular with female bathers as it attracts male bathers with perverse intentions). To this end, Smith has Kimihito Kurusu and his tenants stay at the onsen to test out the Inn's Liminal facilities and see if they can't find a way to increase the Inn's business; resulting in the concept of the onsen hosting an "Extra-species Dating Event" to increase revenue and further aid relations between humans and liminals.

Some time later, with the establishment of the ""The Dating Pool" mixed-bathing couples event" under way, Yukio requests Kimihito's help in supervising the event while the event's original superviser, Polt, takes a business trip overseas.

While possessing many of the facilities of a normal onsen, Sno Ball has also been retrofitted to cater to Liminal guests in addition to humans. There are lodging rooms large enough to allow the largest Liminal tenant to spread out and relax comfortably in addition to also being handicapped-friendly and completely waterproof.

The resort's hot spring facilities range in size from indoor baths large enough to allow a Centaur to submerge up to their shoulders in the center, to shallow waterfall pools for those that can not submerge themselves in large quantities of water (such as Slimes). Sno Ball also possesses mist and luke-warm saunas for those averse to high heat (such as Arachne and Mantis), multiple baths of varying temperatures, an indoor "mermaid onsen" tank, and a large outdoor Rotenburo which is used to host "The Dating Pool" mixed-bathing couples event.

Retrieved from "https://dailylifewithamonstergirl.fandom.com/wiki/Sno_Ball_Hot_Spring_Resort?oldid=61001"
Community content is available under CC-BY-SA unless otherwise noted.