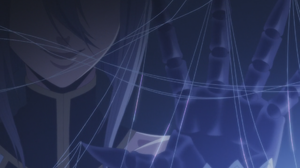 Spider Silk (クモの糸, Kumo no Ito?) is a protein fibre created by spiders for a variety of uses; such as to make webs and other structures that function as nets to catch prey, to create nests or cocoons to protect their offspring, or to utilize in various methods of suspension similar to ropes.

Many small spiders also use spider silk threads for "dynamic kiting"; where a small spider or spiderling let out several threads of silk into the air similar in function to a kite or parachute, and let themselves be carried away by winds.

In some cases, spiders may even use silk as a source of food. Some daily weavers of temporary webs will eat the unused silk at the end of the day as a source of protein to build more webs the following day.

Most silks, in particular dragline silk, have exceptional mechanical properties. They exhibit a unique combination of high tensile strength comparable and extensibility (ductility). This enables a silk fibre to absorb a lot of energy before breaking (toughness), much more than Kevlar or Steel on a weight-to-weight comparison.

Amongst Liminals, both mainstream Arachnes and Small Breed Arachnes are able to produce spider silk as well due to their arachnid physiology. It's common practice amongst Arachnes to weave a wide variety of objects from their own thread, such as clothes, hammocks and dolls. Arachne silk is said to be five times stronger than steel and twice as elastic as nylon.

Retrieved from "https://dailylifewithamonstergirl.fandom.com/wiki/Spider_Silk?oldid=47478"
Community content is available under CC-BY-SA unless otherwise noted.