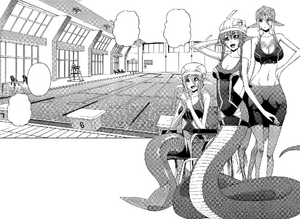 Swimsuits are an item of clothing designed to be worn while participating in activities involving water, such as water sports and swimming. It is also common to see swimsuits being used for summer activities, such as sun bathing and beach sports, being used as undergarments for specialized diving clothing such as wetsuits, and also worn to display the human body as seen in various magazines.

While artistic evidence can date "swimsuit-like" attire worn by a woman to Pompeii in 1960, the first example of the modern day female swimsuit came in the form of Bathing Gowns in the 1800’s. Made out of weighted, non-transparent fabrics the one-piece gowns (practically full dresses) were separated into two-piece gowns (dress and trousers) come the 1900’s.

In 1907 Annette Kellerman, an "underwater ballerina" from Australia, created controversy in America for wearing a skin-tight swimsuit that exposed her arms, legs, and neck. Her influence would eventually lead to the gradual shrinking of the Bathing Gown design to expose the arms, thighs and bosom, and doing away with the dress portion of the gown, instead coming close to the Swimsuits that the men and children were wearing at the time. It was also at this time that new fabrics were being tested to provide extra strength and comfort to the wearer of swimsuits.

Come the 1940’s, swimsuits began to feature in glamour photography due to their figure-hugging nature. From then onward the swimsuit design began to take the form most commonly seen today, with the Bikini (named after a nuclear testing sight due to its “explosive effect on the viewer”) first being introduced just after World War 2 in 1942. Initially similar to the two-piece swimsuit (shirt and shorts) of 1920, the Bikini exposed the midriff of the wearer, while the 1920 swimsuit did not. As with the swimsuit, from 1960 onwards the Bikini design began to shrink to expose more and more skin, sometimes going as far as to only be covering the nipples and genitalia. During this time, the Monokini (a Bikini without the top, leaving the breasts exposed) was introduced by fashion designer, Rudi Gernreich. The Thong design was introduced in the 1980’s from Brazil. 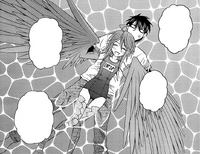 The "traditional swimsuit," which covers the majority of the torso in one piece of material, resembling a sleeveless leotard. It is considered by most to be the most modest of the swimsuit designs, the most common style being the Tank Suit or Maillot.

Variants in the designs include the halter neck, where a strap wraps around the back of the neck to hold up the bust, and plunge front swimsuits, as well as wrap-round bandeau styles that possess no shoulder or neck straps. Some styles of the one-piece may have sections that have been cut-out in order to expose the stomach or the cleavage. 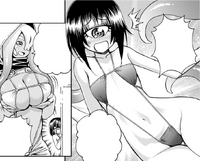 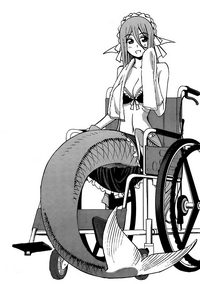 Normally possessing much the same coverage and design as the typical bra and panties combination, the traditional bikini covers both the pelvic and upper chest area while exposing the mid section and stomach. Variants of the bikini include:

Retrieved from "https://dailylifewithamonstergirl.fandom.com/wiki/Swimsuit?oldid=60169"
Community content is available under CC-BY-SA unless otherwise noted.