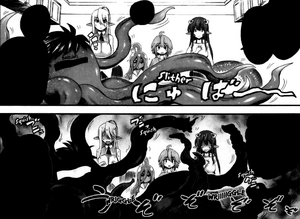 The Tentacle Monster is a category of liminal species that is defined by their highly aggressive sexual appetite and their possession and use of tentacle appendages. While exceptions do exists, tentacle monster species are largely considered apex predators, are sexually predatory, come in incredibly diverse and versatile forms and are alien in physical appearance to the typical humanoid form.

Tentacle monsters are infamous and greatly feared for their ability to use sex and a creature's biological base instincts for sex against their prey. Even apex predatory species like Arachne and Devils can become prey to tentacle monsters and so most liminal beings actively fear and avoid interactions with the species. Some tentacle monsters can even prey on ghosts and spirits (beings that are normally immune to biological predation) and possess specialized appendages capable of interacting with spiritual energy, ectoplasm and mana.

Typically tentacle monsters use their tentacle limbs to ensnare and restrain their prey. They are masters of waiting for prey to come within reach of their tentacles or luring their prey to them by either hiding or presenting a benevolent/harmless facade until their unassuming prey is within reach. Once their prey is ensnared, the tentacle monster will then proceed to use their limbs to restrain the prey and begin assailing their body; seeking out, probing and penetrating inside the orifices of the prey's body for varying intents and purposes.
Penetration is usually non-consensual and involuntary for the prey (although some "prey" do seek out interactions with these species of their own violation and encourage the penetration of their orifices with full consent), however, in frequent incidents, the prey's initially non-consensual attitude changes into active consent as the tentacle monster either breaks the prey's mental cognition or uses its knowledge of the prey's erogenous zones to manipulate their libido and sexual instincts into desiring continued sexual activity with them. If unchecked, this results in the prey succumbing completely to the tentacle monster and they ignore their instincts for self preservation by allowing and actively encouraging the tentacle monster to assail their body until their death or until the monster is otherwise done with them. This is why the tentacle monster is considered one of the most feared sexual predators amongst liminal species but also one of the most desired and idolised sexual partners amongst sex enthusiasts as even non-sentient tentacle monsters demonstrate a heredic knowledge and ability for carnal sex that rivals even the Devil species.

In the late 19th century (1882) Joshua Handley, an English artist and photographer for erotic literature in Paris, traveled to Japan to document the less well-known aspects of the Japanese and their culture. This resulted in him viewing the Dream of the Fisherman's Wife and forming an obsession with cephalopod erotica. Handley attempted multiple times to publish illustrations similar to Dream of the Fisherman's Wife in England, even coming up with some of his own involving female pearl divers, shipwrecked gentlewomen or unwary bathers who would fall prey to an octopus and become enmeshed in its tentacles, however, his publisher was appalled by the content. Not by the tentacles and rape (which they believed would appeal to people with "darker sensibilities") but at the notion that the women in the stories actually enjoyed themselves as they succumbed to tentacles and suckers. Handley eventually gave up trying to produce his artworks and, ashamed of his tastes, abandoned all involvement with pornography and turned to illustrating children's books under his mother's maiden name.

As part of the Meiji Restoration (1868-1912), which saw Japan adopt many aspects of western civilisation in order to "become more civilised", Japan adopted new laws influence by Victorian-era Europe to forbid public nudity (where previously Japanese men and women were free to walk around topless or in loin-cloths should they wish) and multi-gender public baths. During this era, creation of traditional Shunga art was also restricted.

The use of tentacles in live-action films started in American B-movie horror films and has since migrated back to Japan. Producer Roger Corman used the concept of tentacle rape in a brief scene in his 1970 film The Dunwich Horror and he would again use tentacle rape while producing Galaxy of Terror in 1980. The scene was so graphic that the film's director, B. D. Clark, refused to helm it and the actress whose character would become the victim refused to do the full nudity required, so Corman directed the scene himself and used a body double for some of the more graphic shots. 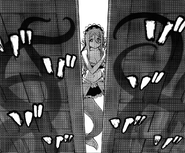 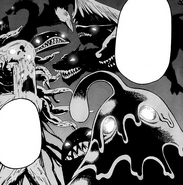 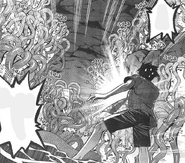 Retrieved from "https://dailylifewithamonstergirl.fandom.com/wiki/Tentacle_Monster?oldid=62665"
Community content is available under CC-BY-SA unless otherwise noted.