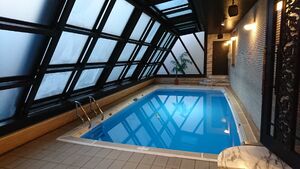 That Pool (あのプール, ano puuru) (also known as The Usual Pool (例のプール, rei no puuru)) is an indoor swimming pool that appears frequently in Japanese gravure photo shoots and adult films.
It's frequent appearance has resulted in it becoming part of the country's internet subculture with many people recreating the location in sandbox games like Minecraft, creating models of the location and even featuring it as a gag location in manga and anime.

The pool is located within a high rise in the Shinjuku district of Tokyo built some time before the country's economic recession in the early 2000's. Connected to a luxury apartment studio known as "The Hanazono Room" that once belonged to Japanese actor Koji Ishizaka, after Ishizaka moved residencies the location became owned by Japanese real-estate company P-Studio who began renting the location out to various film production companies.
Due to its close proximity to Japanese model agencies and production companies, the indoor pool became frequently used as a backdrop for swimsuit photo shoots and adult films, especially low-budget productions with limitations on location shoots.

Sometime in the mid-2000s, a few of users on BBSPINK (2-chan's board community for adult content), began to take notice of the indoor pool reappearing in different idol magazine spreads and adult films. Several BBSPINK threads for talking about this pool were posted in 2005 and 2007 and during this period, BBSPINK users were able to identify the pool’s location as the Hanazono Room and began referring to it as "That Pool".

Retrieved from "https://dailylifewithamonstergirl.fandom.com/wiki/That_Pool?oldid=48915"
Community content is available under CC-BY-SA unless otherwise noted.