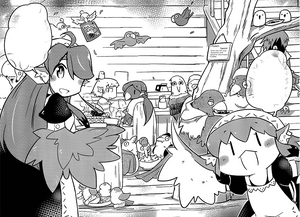 While Rin works as the proprietess of the cafe, her little sister, Suzu, acts as the cafe's waitress; although her young age frequently leads to her getting distracted, making mistakes or simply forgetting her job. Although he considers himself a customer, Hirokazu creates the majority of the cafe's food, acquires new supplies and oversees modifications and improvements to the cafe. Rin considers him as the cafe's manager despite his insistence that he is not.

Located within the branches of a tree accessed from the ground only by a hanging vine, sales representative Sasaki Hirokazu chanced upon the Birdhouse Cafe after chasing Suzu through the woods when she stole his briefcase.

The sisters took over the cafe after the domicile was abandoned by its original owners, who also used the location as a restaurant named The Trio Cafe (Toriokissa). Taking the residence up as their new home and living in the cafe's upper floors, the girls attempted to run their own cafe by reading the menus and pamphlets the previous owners had left behind and trying to make their food by matching the pictures. However, this resulted in them using mud to make coffee and worms to make noodles.
Understanding their problem, Hirokazu quickly showed them how to use ingredients to make food edible for humans while also helping them to improve the cafe by cleaning the residence and conducting various repairs.
After a tree branch fell through a wall during a storm, the cafe was repaired by a crew of Muscle Bushtits that had originally sought shelter within the cafe during the storm.

After the cafe grew in popularity amongst the avian community, avian-boss Jamo arrived to confront the human but, after many heartfelt pleas from by the community to let him stay and after sampling one of Hirokazu's pancakes, Jamo decided to allow the human to continue lingering within Avian territory at the cafe and removed the "climbing vine" that Hirokazu used to climb into the cafe to build a series of ladder rungs instead.
Hirokazu further modified the cafe by drilling holes in the back of the chairs so that the avians' tails were not crushed when they sat and added smaller doors at the entrance to allow the smaller avians to enter the cafe.

Retrieved from "https://dailylifewithamonstergirl.fandom.com/wiki/The_Birdhouse_Cafe?oldid=49028"
Community content is available under CC-BY-SA unless otherwise noted.