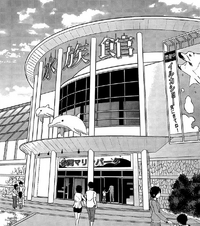 The Tokuma Marine Park is an aquarium that Miia and Kimihito Kurusu went to due to the request of Meroune Lorelei, who arranged herself to be a special guest at that day's public performance with the aquarium's dolphins.

The exterior of the aquarium is very sleek in it's appearance with slanted roofing on the left and large pillars supporting the entrance of the building. The entrance itself has two rather large dolphin statues attached to it. Lots of green foliage and trees surround the front of the building.

During the D Story Arc, Smith suggests that Kurusu goes on dates with all of the girls in an attempt to draw out D, the first of which are Miia and Mero. Mero suggests that they both go to the aquarium. Miia objects saying that a movie would be better but Mero retorts by saying "The aquarium is the perfect date spot!!". While Kurusu and Miia talk about buying a ticket, Mero simply says good day and is allowed in immediately and free of charge, several employees bowing their heads as she rolls past. Miia and Kurusu question how much authority she has, but their train of thought is broken when Mero says that the aquarium is wheelchair accessible and will go look at the freshwater section, leaving the both of them to wander around the aquarium by themselves.

They have fun comparing different fish to the other girls in the house, until they spot two kissing gourami. This sets a rather romantic mood, and just as they are about to kiss, Mero comes between them explaining that they're both boys. Both Miia and Kurusu remain flustered by Mero's sudden appearance, Miia quickly turning angry at the chance she lost. Mero goes on to explain more fish trivia, completely killing the mood. While Miia contemplates this, she realises that Mero has left them, and when she asks where she went, Kurusu interrupts them her by saying the dolphin show is starting.

Both are shocked to find that Mero is appearing with the dolphins, and realise this is the reason she received the special welcome. Mero says she'll work to create a wonderful mood for her and Kurusu, and the show begins. Mero performs gracefully and in time with the dolphin, putting on a show that greatly impresses Kurusu, much to Miia's distress. She runs off before the show ends, angry at Mero for not putting on a wonderful mood and "impressing Darling instead". She is interrupted by a loud yelp and she "stands" on another extra-species person's tail. The person turns around revealing him to be a dashing extra-species male, who states that he is surprised to find an extra-species lady at the aquarium, and that he simply spaced out because of the cold air. Miia relates to this and the two of them go onto talk about things that only cold-blooded creatures would understand. He gives her some black coffee and suggests that they go outside away from the cold air into the sun.

The story cuts to Tio who is attempting to take a dolphin with her after one of the aquarium staff told her she could touch the dolphins. She informs Ms Smith that Miia went somewhere with "a cute guy" and asks if they should follow her. When Tio says that Darling is priority as he is being targeted, Ms. Smith informs her that Miia may be a target too.

Retrieved from "https://dailylifewithamonstergirl.fandom.com/wiki/Tokuma_Marine_Park?oldid=31670"
Community content is available under CC-BY-SA unless otherwise noted.