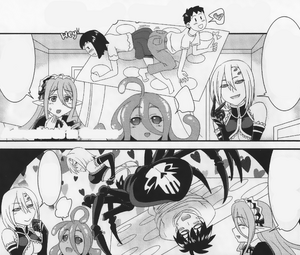 Twister is a game of physical skill produced by Milton Bradley Company and Winning Moves, that has been inducted into the American National Toy Hall of Fame. It is played on a large plastic mat that is spread on the floor or ground. The mat has six rows of large colored circles on it with a different color in each row: red, yellow, blue and green. A spinner is attached to a square board and is used to determine where the player has to put their hand or foot. The spinner is divided into four labeled sections: right foot left foot, right hand and left hand. Each of those four sections is divided into the four colors (red, yellow, blue and green). After spinning, the combination is called (for example: "right hand yellow") and players must move their matching hand or foot to a circle of the correct color. In a two-player game, no two people can have a hand or foot on the same circle; the rules are different for more players. Due to the scarcity of colored circles, players will often be required to put themselves in unlikely or precarious positions, eventually causing someone to fall. A person is eliminated when they fall or when their elbow or knee touches the mat. There is no limit to how many can play at once, but more than four is a tight fit.

Add a photo to this gallery
Retrieved from "https://dailylifewithamonstergirl.fandom.com/wiki/Twister?oldid=49638"
Community content is available under CC-BY-SA unless otherwise noted.