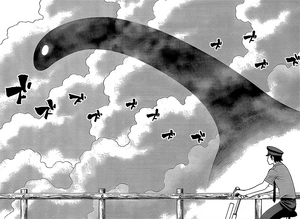 An U.M.A. (Unidentified Mysterious Animal) is a classification of animal or being that has yet to be identified, officially registered and recognised as a species but has appeared fervently in folk lore and myth.

Scientifically known as "Cryptids", the science of proving the existence of such species is known as "Cryptozoology". The study of Cryptozoology has received a notable boom of late due to the enactment of the Cultural Exchange Between Species Bill and the public "outing" of many U.M.A. species.

Retrieved from "https://dailylifewithamonstergirl.fandom.com/wiki/U.M.A.?oldid=47246"
Community content is available under CC-BY-SA unless otherwise noted.