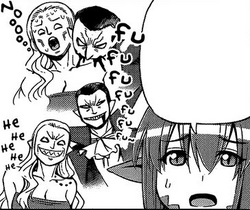 The Vampire Virus, also known as the Vampire Plague or Vampirism, is a highly evolved virus that turns its hosts/victims into Vampires.

Spread through the ingestion, injection or transfusion of blood or saliva of a vampiric individual, the virus is said to have an incubation time of five days but the physical transformation that the virus renders upon the host can take anywhere from a week to a month to complete. During this time, the infected will begin to feel dazed and faint, become sensitive to ultraviolet light, and exhibit mild flu-like symptoms as the virus alters their DNA.

Despite claims to the contrary in old folk tales, the vampire virus is fairly weak and only able to infect the body of a host that is already near death as the immune system of a body at full health will easily dispose of the viral infection. To this end, if a vampire desires to infect an individual they first feed on them until their victim has lost enough blood to be near death. With their white blood cell count low and their body otherwise preoccupied with trying to sustain itself with depleted resources, the virus can freely infect the individual with virtually no resistance from the individual's shattered immune system. When the conversion process is complete, the victim will become a classification of "Vampire".

Retrieved from "https://dailylifewithamonstergirl.fandom.com/wiki/Vampire_Virus?oldid=61293"
Community content is available under CC-BY-SA unless otherwise noted.