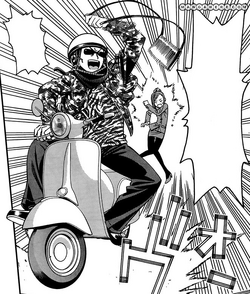 Vespa is an Italian brand of scooter manufactured by Piaggio.

Originally a single motor scooter manufactured in 1946 to address traveling on the war-torn roads of post-World War II Italy, the Vespa model extended into a full line of scooters and had become its own brand by the 1970's.

The unnamed Purse Thief owned a Vespa, which he used to escape after snatching purses from unsuspecting women. After one such theft, he was pursued by Centorea and Kimihito. During the chase Kimhito accidentally ripped Centorea's shirt, exposing her breasts, and the sight caused the thief to crash his Vespa.

Retrieved from "https://dailylifewithamonstergirl.fandom.com/wiki/Vespa?oldid=61870"
Community content is available under CC-BY-SA unless otherwise noted.