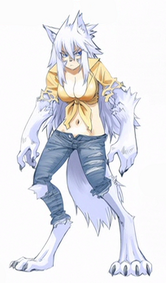 Werewolves (狼男, Ōkami Otoko), also known as "Wolfmen" or "Wolf People", are a pseudohuman species of beings who are spoken in myth of possessing the ability to shapeshift between the form of a human and the form of a wolf.

While the image of the 'lone wolf' is popular, they actually prefer communal living in the form of packs. While most monster species are affected by the Full Moon, werewolves can prove even more trouble due to their pack social structure and their great physical strength.

For centuries, the werewolf race was depicted in both eastern and western human cultures as savage predators that can appear as a human, as a wolf, or in a hybrid form. They were regarded to be dangerous, bestial, violent and unrestrained creatures of instinct that possessed no sentient reason or remorse in their primal audacity as they savagely hunted and fed on humans and other medium to large prey (such as cows or horses).
As human culture grew, so too did werewolf culture. Already instinctively forming packs following an Alpha leader much like their beastial wolf counterparts, werewolves began to develop further into forming a culture immersed in all that is "earthly". As humanity began to form traditions of "restraint" and "civil purity", werewolves began to see themselves as protectors and guardians of primal nature and the natural order. The values of their culture reflected this through the formation of traditions that emphasize respect of the cycle of life and their natural environment, and also the acceptance of indulging "natural urges"; resulting in social practices and rituals that were considered taboo in human culture as "base" and "dirty" desires that were "of the realm of animals and to be restrained"; such practices include indulging in casual and/or hedonistic nudity, homosexuality, bisexuality, incest, group sex, public displays of affection, the acceptance of casual and polyamory relationships, and the fornication with other liminal species and bestiality (when in "beastial form"). As a culture Werewolves dislike undead races such as Vampires and Zombies, as they regard such beings as "unnatural" and an affront to the natural order of life and death.
The werewolf culture led to their association with natural witchcraft (due to their shared regard for all things natural), and by extension, their association with and cultural intermingling with human witches and warlocks. This led to their hunting and persecution during the witch trials of Europe and America as they were considered the "unholy pets and partners of fornication" of witches and warlocks. In North America, Werewolf culture closely follows that of the native Indians; tribal societies led by a "chieftain" that focus on "living off the land" and "appeasing mother nature and natural spirits". Many myths and legends stemming from native american folklore speak highly of the exploits of werewolves and similar werebeasts and benevolent interactions, relationships and liaisons between them and humans were regarded as beneficial for the tribe as it was thought that the human spirit could only become stronger through the introduction of "animal strength and spirit" (that being said, one of the most malevolent beings in native american myth is a shape changing were-creature (Skin-walker)) 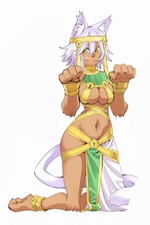 Werecats are a pseudohuman species of beings who are spoken in myth of possessing the ability to shapeshift between the form of a human and the form of a cat.

Were and Suzie are Werecats.

Werefoxes are a pseudohuman species of beings who are spoken in myth of possessing the ability to shapeshift between the form of a human and the form of a fox.

Also known in Japan as belonging to the "Yokai" subspecies group, for some reason, many werefoxes take up positions as miko shrine maidens. A variation of this subspecies possess nine tails and are called Kitsune; these individuals are said to possess rudimentary transformation powers.

Wererabbits are a pseudohuman species of beings who are spoken in myth of possessing the ability to shapeshift between the form of a human and the form of a rabbit.

Retrieved from "https://dailylifewithamonstergirl.fandom.com/wiki/Werewolf?oldid=59955"
Community content is available under CC-BY-SA unless otherwise noted.